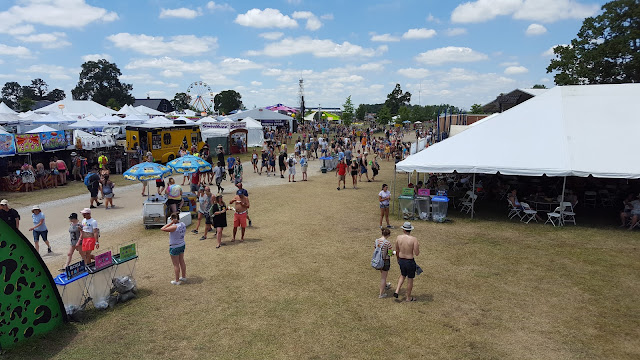 Friday morning and I try to sleep in for a bit, all snuggled up on my Slumberjack cot. But the sun starts blazing and the eastern wall of the tent fills with light.

Fresh fruit, grapes blueberries and bananas. Some fresh mozzarella cheese and 1/2 an everything bagel. Perfect breakfast. Refilled my cooler with a $5 bag of ice and realized I didn't have to get one on Thursday. It was after lunch by the time I went in.


High fives! Once in Centeroo, I immediately hit my free State Farm locker. Grabbed my Camelback and threw my poncho in. The locker works by entering your code twice to lock it. When you come back, you enter the code to open it. Then it starts over. Not a huge amount of space but they were centrally located and FREE.

I hit the Chargr booth and mentioned my phone only got a half charge. They switch out the battery and let me keep the token. Filled up my Camelback just in time to catch Klangstof, all the way from Amsterdam. They were ambient, a bit like Mogwai. It was here that friends Zach and Katie found me and sat with me during the show. This was interesting because, unbeknownst to Katie, Zach had orchestrated a marriage proposal that was scheduled to take place at the end of this set. For his part, Zach looked quite chill.

I made the excuse that I had to pee and made my way to the rendezvous point while the love birds went and rode the ferris wheel. There we are, this large group, sitting at the entrance of Planet Roo. We await the signal from Jeremy, The Runner. Everyone is holding sunflowers but only people with Big Sunflowers are supposed to hand them to Katie. Anyone with a Small Sunflower should just hold onto it. It's cool to be a part of this, in part, because I know so many people in this crowd and we all know each other because of Bonnaroo. 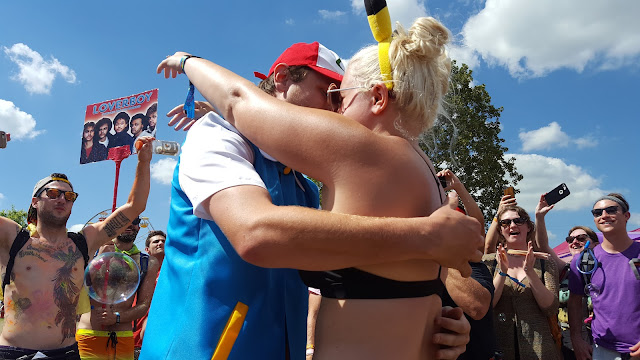 Anyway, The Runner gives us the cue and the procession starts. I'm in the back and I'm short so I have no idea whats going on up front. I capture a ton of shots as I go, just in case. By the time I reach Zach and Katie, it's clear that both Big and Small sunflowers are now being laid at Katie's feet because she's currently happy beyond control. The circle forms and Zach does his part perfectly. The cheers from the crowd when she said 'yes' rivaled any of the tent acts in 2017! 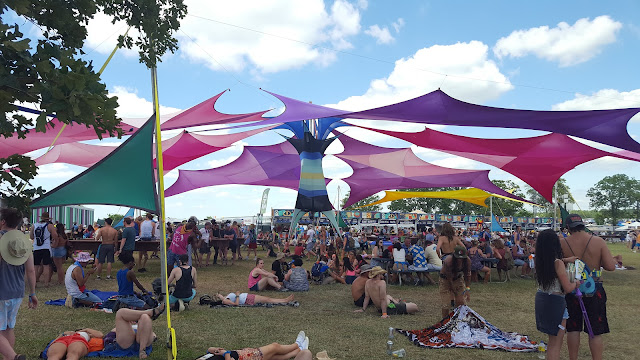 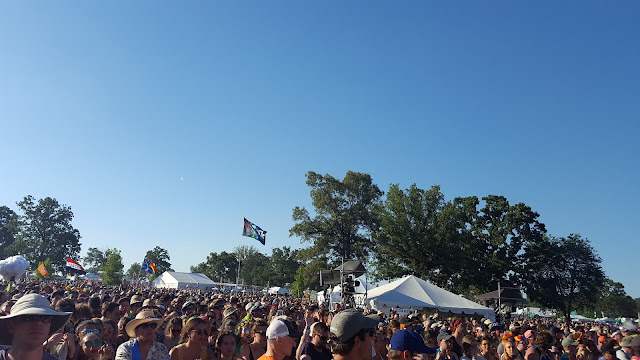 Caught the last of Khruangbin and I really loved them. "Hit it and quit it" was epic.

Then it was the The Strumbellas at the the Which. They're vibrant and jamey. I sat in the shade and enjoyed the set.

Car Seat Headrest at the This Tent
Around 5:20 pm, a lucky fan named Andrea was called up on the stage to play with the band. Her instrument: the cowbell. This was clearly a surprise for Andrea and she rocked that fucking cowbell for the entire song. What moment to be alive.

Cold War Kids at the Which Stage: I saw them at my first Roo in 2007 so this was a great set for me. They still rocked it.

Tove Lo. Not a huge fan but it was good.

ALERT: See the girl pictured in the cutout below? That's Zoie Cooley She's been to Bonnaroo several times and her dad wouldn't let her come back this year. So, the grandparents (that's him in the middle) took her there virtually. And as a payback to dad, we need to share this. Please share this photo with the hashtags: #zoie #bonnaroo 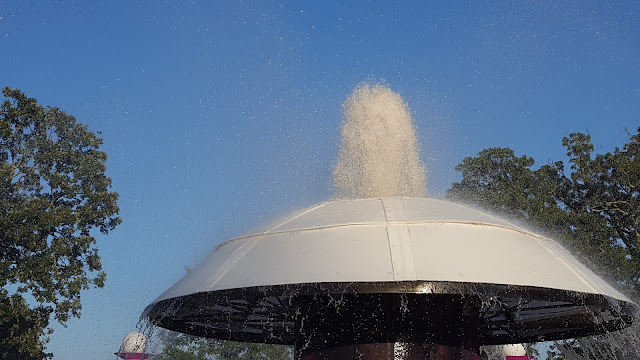 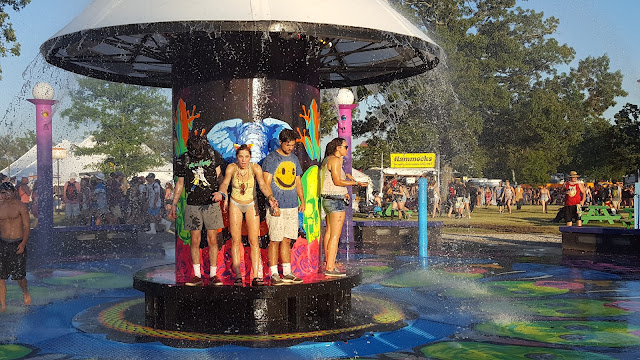 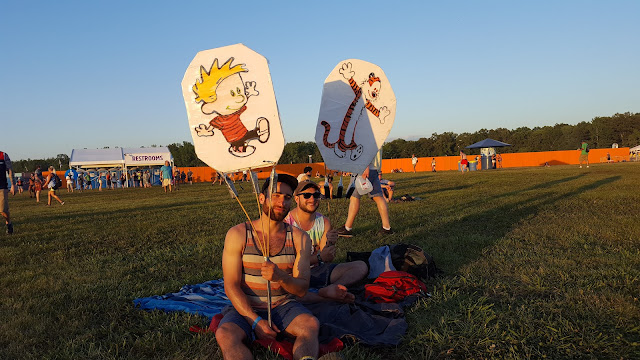 The XX at The What Stage
Love the xx and they brought their subdued rhythms perfectly. <3

Glass Animals at The Which Stage
Dazzling. Good interaction with the crowd.

U2 at The What Stage
My first time seeing U2 and their first US festival appearance! Their production was gorgeous and while Bono can't exactly hit the high notes anymore, the whole set was basically a giant sing-a-long. Remind me why these guys didn't play on Sunday?

And mother-of-flipping-Jesus with the shroom fart crop dusting. I don't advocate taking drugs but I believe in your right to do it. And I'm glad you're having fun and all but know that everyone left in the midst of your fart cloud is deeply sad. Just, horribly sad.

Portugal. The Man at This Tent
I love these guys!! My only complaint is the sound overlap from Which (thanks to Major Lazor). But really, no music instrument can compete with that kind of bass.


It's late and I'm back to my locker to switch things out. The code doesn't work. I've been using the same code all night. Haven't I? Did I change it last time? I try every four digit code I can think of. Nothing works. It won't unlock. Screw it.

Headed for the campsite. Good night.