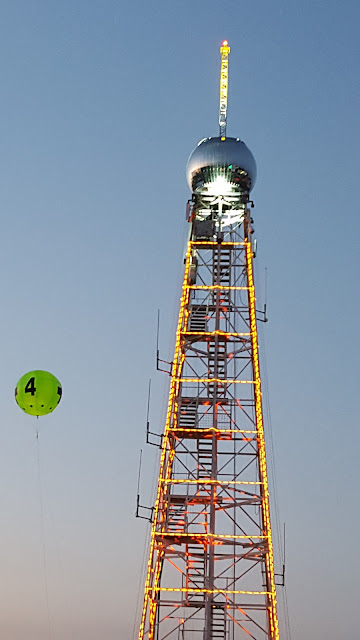 Hello Bonnaroo!
First things first and I need a shower. I'm over at the clock tower and the Kohler-sponsored showers which are now $10 each but supposedly include 'pressurized hot water' and 'piped in music.' They're not open yet as they're fixing an issue and the staff doesn't know what's going on. I wait about 30-minutes and the guy comes and unlocks the gate and takes my money. I pick a shower and turn it on. Nothing. I try four other showers and nothing. I'm directed over to the girls side (yay!) but the guy comes back and has supposedly fixed the pressure. True enough, the water is on but it's ice cold. Whatever, I need to feel clean so I suck it up.

I walk back to the Centeroo entrance and am told to I have to go to the 4th Street entrance. No reason given. I proceed to the 4th Street entrance where I'm told I cannot pass because of the work being done on the Arch. I am, however, allowed to use the VIP entrance. I proceed to the VIP entrance where I'm told NO ONE is allowed in. It takes a few minutes of explanation but I'm finally allowed to enter. Security is tight as a drum, Sir.

I stop at the craft beer booth and ask a women behind the counter if I could buy a bag of ice (forgot to get one in the campground). She pondered my question for a moment and looked around. I was about to tell her not to worry about it when she threw a bag of ice on the counter and said, "Just take it." How sweet was that? And it was a solid bag of ice too - it would keep my cooler chilled for two hot days.

Fresh fruit for breakfast and I grab a latte from the Bear Claw booth. Last minute preparations are happening as golf carts go whizzing by or people run to their booth with arm loads of stuff. The gates open at 10:35 am and a slow trickle of people turns into a gigantic flood. It was magnificent to watch. At the ShelterBox tent, lots of people found me right away which was a lot of fun.

I work in the ShelterBox booth talking about the organization and the amazing volunteers who make it happen. Everyone wants to see the tent.

My shift ends at 1pm and it's time to go see some music, Unlocking The Truth would be my first band for 2015. These three kids were talented and funny as they shredded some heavy metal. "We're not gonna play anymore until you guys get down on the ground. EVERYONE. GET DOWN," the lead singer growled in his 13-year old voice. We all obliged and jumped when he said to.

A fun act to watch. It was also here that I ran into some Bonnaroo friends from ConcertHopper.com and MusicFestNews.com, respectively.


Ryn Weaver belts it out and then I'm camped out at The Other Tent to watch Temples, Glass Animals, Benjamin Booker and Gramatik crank out the Thursday night goodness. My camp chair is comfy and my refillable Bonnaroo cup saves the environment with every $7 beer I purchase.

Gramatik is bassy and fun but there is overlap music from Kallopie. It's EDM and it's loud. I don't remember that being a problem last year and it's annoying. After their set, I retire back to the the tent.

The Kallopie blasts crazy music into the night and it's crazy loud. Especially since Planet Roo is in line with the stage. Yikes. I put in ear plugs and after awhile, I drift into sleep.