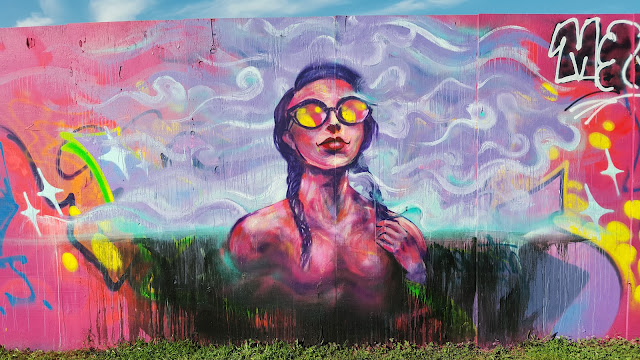 I'm up (I think) so I hit the shower over by the clocktower. Today's shower is the worst. No hot water and periodic low pressure. Just when you get soaped up, it cuts off. Drip, drip. And no piped in music, btw, as if that helped at all. But please keep my $10 Kohler, ya'll clearly need it.

On my way back, I stop at the craft beer stand in Centeroo to see about getting a bag of ice.

The young man behind the counter was less than polite when I asked him if I could buy a bag of ice. He insulted me and bowed up on me at one point. (wtf?) I wasn't impressed. I asked his name which he wouldn't give. The women working with him was doing her best impersonation of being invisible but the look on her face said it all. I left with him taunting me. It was 8 am.

I went over to Bearclaw and got a latte and breakfast sandwich, sat under a nearby tree and tried to let go of the negativity. It was almost time for my shift and Bonnaroo would soon be coming to life for one more glorious day.

It would be a great shift in the ShelterBox USA booth. People continued to find me and get stickers and still more came in to learn about the tent and disaster relief. Among the people I got to meet were Bryan Edwards from Bryan Edwards Photography. Chances are you've seen his photos on Facebook, I know I've shared one or two, He takes a lot of great Roo pics.

Then, near the end of my shift, I met some other folks. First, I met a young staff lady who said she had read my blog and admired the work I was doing for ShelterBox. Next was a young man with the outline of the State of Vermont tattooed on his forearm. (I was born and raised in VT). Finally, I met a young lady who arrived to Bonnaroo and, during camp setup, she stepped in an unforeseen hole and broke her ankle. She got patched up AND CAME BACK. She was a fan of the blog and wanted a sticker! Such lovely people. That's why I keep coming back.


Back in the Food Truck Oasis and this time I'm getting poutine with maple drizzle and a fried egg on top. Holy crap is it good. I am also graced to accidentally sit with Bonnaroo Royalty (aka Have been to every Bonnaroo). You just never know who you may share a table with at the festival.


Out in the field of the What Stage to check out TwentyOne Pilots. They're energetic and fun though their set started late. They direct the crowd to crouch down and jump up on cue. They do a cover of Bob Marley's "No Woman, No Cry." Nearby, a happily intoxicated young lady is dancing/stretching in a skin tight dress and showing everybody her bits. The singer from 21 talks about how the festival told him not to climb on the stage and he pretends like he's going to ... then doesn't.

Next was Awolnation at the Which Stage. Love this band and have seen them a couple times. I found a shady spot to enjoy the show. 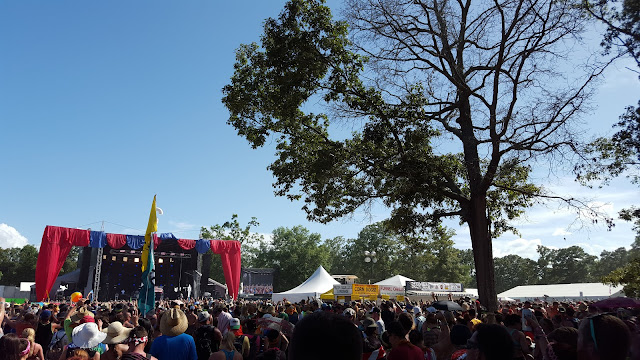 Then it was time to play under the RooChute and embrace my inner child. Surprisingly, people found me while I was under there. They deserved stickers, for sure! 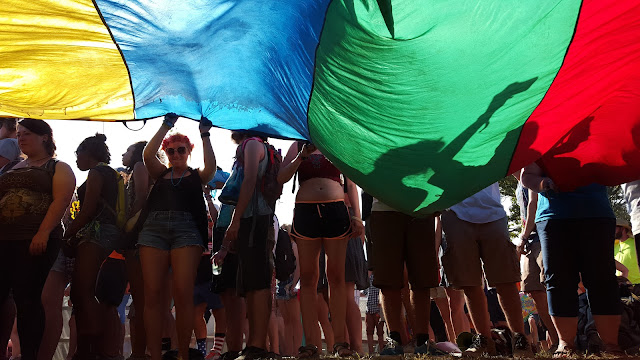 An innovative totem and idea, the SelfieRoo guys created a fun way to play at Bonnaroo. If you had your picture taken by them, visit selfieroo.com.

Bonnaroo Sundays are always my favorite day and this year is no exception. I saw Florence and the Machine at The Other Tent back in 2012. And here she is on the The What Stage just three years later. Her set is ferocious and fun as she jumps and twirls about on the giant stage.

Move over Florence, I have another show to catch.

Robert Plant is about to play The Which Stage and I need to get a decent seat. He's still belting it out. With the Sensational Space Shifters, they play tunes from their latest album, Lullaby and...the Ceaseless Roar. The real joy comes when they break into rocking versions of Led Zeppelin tunes. They play versions of “Whole Lotta Love,” “Black Dog,” “Rock and Roll” and combine "Dazed and Confused" with Howlin' Wolf's "No Place to Go." Plus, he throws in an amplified Plant-scream once in awhile. Holy awesome. There was some sound overlap from G-Eazy in the distance. Par for the course, I think.


So Billy Joel is taking the stage. He plays tons of songs and I know most of them but I've never been a huge fan. He plays hit after hit and even brings one of his roadies out to do a cover of AC/DCs 'Highway to Hell.' I'm impressed with Billy as he's very precise and in harmony, though he takes the occasional breather between songs. It's hot! Take your time, dude. My favorite moment of Bonnaroo 2015 will forever be locking arms with my fellow ShelterBox volunteers and singing along to 'Piano Man.' Thanks for that memory, Billy. Also, I think he ended his set early.

After the show, the team heads back into Centeroo, and we're all bummed it's over. Our sadness is abruptly ended by the security teams guarding the newly made perimeter fence blocking volunteer access. Trucks and golf carts are busy moving as the teardown process goes full throttle. '

One young man in particular starts to lose his shit and the horse mounted security guys bust in to show force, though nothing happens. Finally, someone in charge shows up and let's us back in.

I say goodbye to the team members who won't be travelling with me and head back to the booth tent. They grab miscellaneous items from the tent and start the trek back to camp. There is no music but plenty of construction noise as things get torn down. I stay up a couple hours and square away as much gear as possible. And finally, sleep.