Yoga, anyone?
Early morning in Planet Roo and the place is packed full with people ready to participate in group yoga. I grab a black bean breakfast burrito and a coffee from the Planet Roo Cafe and get ready for my shift. Special thanks to the volunteers over at the Headcount booth for being so awesome and outgoing. They keep energy level going all day. I didn't get great sleep the night before and am reconsidering the decision to sleep in Centeroo. It would be a heck of a process to transfer my gear and such. Better to tough it out, right? I got this.


Had the pleasure of talking with Mike, a Tennessee local that follows me on social media. He's been to every Bonnaroo (people who have been to each one are referred to as Bonnaroo Royalty), and even to Itchycoo, the infamous precursor to our beloved festival. We talked about changes over the years and agreed that the festival, ultimately, keeps getting better.


Soon after, I got a visit from Tricia, who became a volunteer for ShelterBox after reading my blog. I was touched that I could have that kind of impact and was so happy to meet her.

And then, it was off to a wedding proposal. JP had prepared signs that talked about memories he had in common with his squeeze, Dana. People held the signs strategically across Centeroo as the couple strolled through until they reached the last sign which read, "When I proposed to you at Bonnaroo." 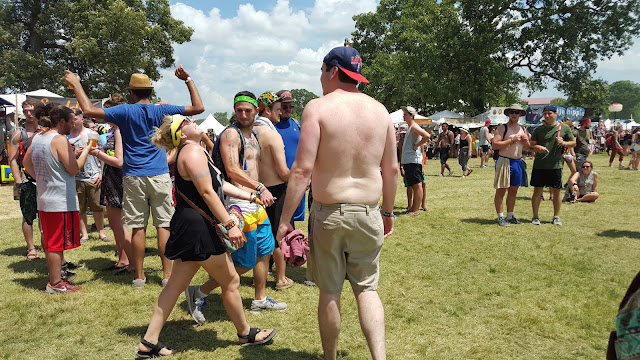 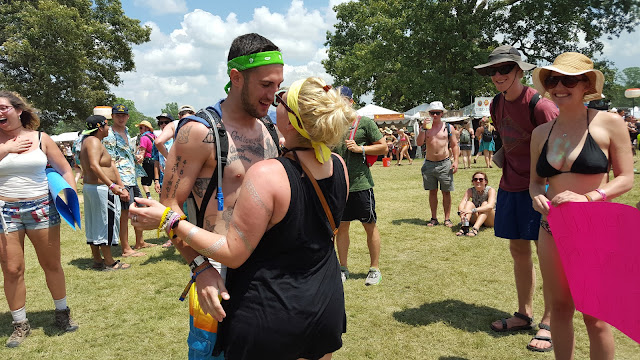 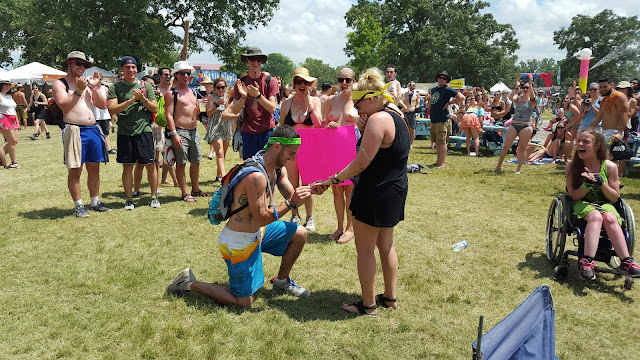 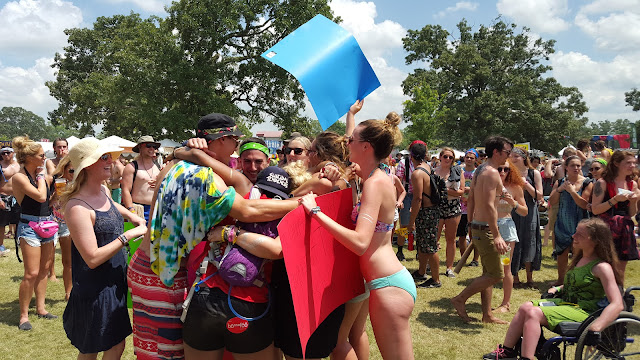 Pictures of other Bonnaroo friends: 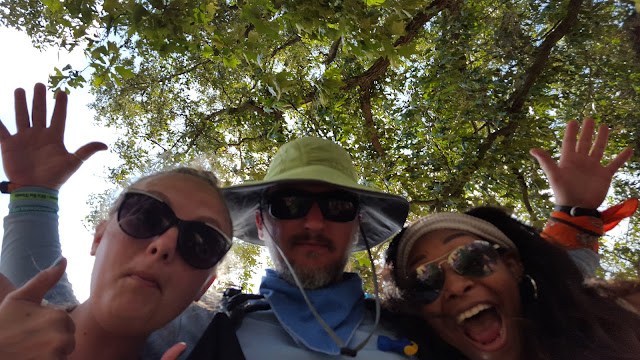 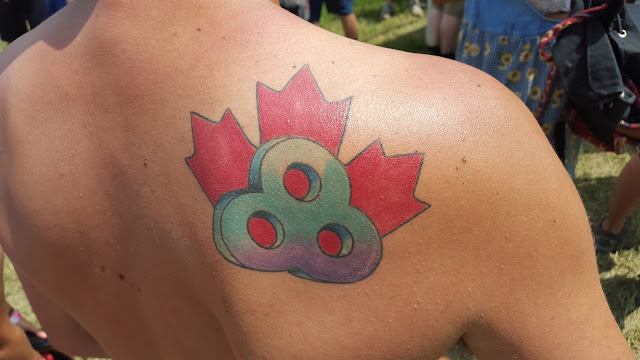 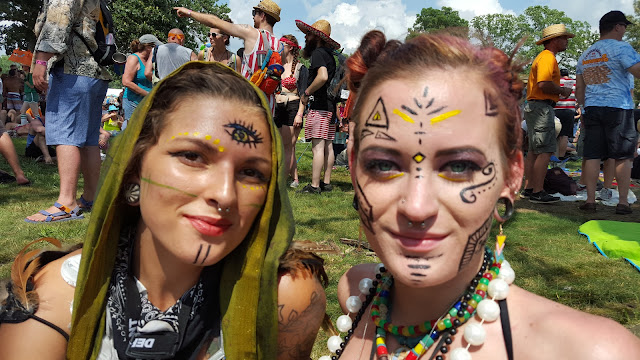 Back to the music and Brown Sabbath is my new favorite thing ever. How have I not experienced this before? Sabbath with soul? I'm impressed.

Then it's Royal Blood up on the Which Stage.
The sound is fantastic and free entertainment exists in the young man who established a hammock in a nearby tree. It's probably 25 to 30 feet off the ground and his belongings are scattered on branches above and below. He's tucked into his hammock, jamming away to the music in one moment - then hanging on for dear life trying to retrieve an item from a lower branch in the next. I found myself holding my breath. Once he was back in the nest, I turned my attention back to the music.


Amazing music lineup continues with Against Me! as they deliver great energy and the crowd responds enthusiastically. Great live act.


Dinner time at the BonnarRoots Community Feast!
I ordered the $50 ticket a couple weeks earlier on the Roo website. It is a dinner in Planet Roo where all of the food is from within 150 miles of Manchester, most of it considerably closer. The ticket money is donated to OxFam, btw.

I LOVED this!
The Feast wrapped around the Post Office with a long table beneath the handcrafted wooden archways. Drinks were served over ice in a large stainless steel tumbler (I choose Angry Orchard Cider over the DIY herbal soda choices). We were given wooden utensils contained in a Bonnaroo branded sleeve. The tables each had a host from one of a handful of the non profits in Planet Roo. At my table was Ben Salter from SOCM Statewide Organizing for Community eMpowerment. He talked to us about the membership driven initiatives from SOCM that do good work in Tennessee and led us through each meal course. The food was delicious and clearly fresh (You can read the menu below). The herbs were cultivated from the learning garden planted next to the Post Office, just feet away. The meat came from different local butchers. Everything was served family-style in big, heaping plates. We all took turns passing food around which quickly broke the ice. There were some 50 odd people seated around the table at one point, including one of the festival founders.

It's a lovely and unique way to enjoy a sunset at Bonnaroo. Especially if you're a foodie.


I headed in near the end of Guster's set.
They played a cover of 'Come On Eileen' that got me noodle dancing. As folks filtered out, I filtered closer to the stage. The show ended and the immediate exodus created a vacuum and I got sucked forward to about four people from the barricade. And here we sat while the roadies disconnected and reconnected all the necessary parts. It's sweltering, elbow to elbow, no breeze or moving air and thousands of heat-generating bodies. And to make it worse are the smokers. Blaghhhh.

Also, I'm fully aware that I'm missing Alabama Shakes right now, dammit. Anyway, everyone is in the same boat and were all following the Roo code to chill. I'm talking with the people in the immediate vicinity, including the cute woman next to me. I hand out stickers. Not long after a young Chinese woman standing behind me just passes out, presumably from heat exhaustion. I yell for a medic and some folks (friends of hers?) stand her up and start weaving her out of the crowd. And soon after that, the cute woman next to me has a friend who knelt down to rest. She wasn't coming back easy so they both immediately departed out of the crowd. It happened quickly and about a minute before the next act started. Hydration is critical, campers!!

Tears For Fears is playing This Tent and I'm about 8 people from the front. Wait, I didn't move yet I'm further away. WTF?! Still, plenty close when the 80's legends take the stage and play all of the songs I wanted to hear starting with Everybody Wants to Rule the World. They covered Radiohead and played Sowing the Seeds of Love and Break It Down Again. My 80's self was in heaven.

Everyone sang along. After three quarters of the show, I headed out for some fresh air. Near the back of the tent, I ran into Ben from earlier. The band closed their set with Shout, of course, and Ben and I sing along with crowd. A huge favorite for me. 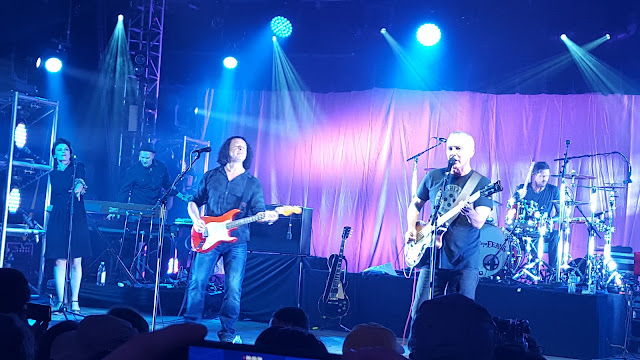 I make it to the Which Stage to catch the end of Ben Harper's set and he doesn't disappoint. He lays it down, as always. I stay near the back and people watch.


Que'd up at the Which Stage with teammate Ron to watch Earth, Wind and Fire and the guy behind us is blowing everyone's mind with his green laser. It sprays across the crowd in patterns and drives everyone nuts. Looks cool too. EW&F sounds great. They are a large band and those older guys still have some dance moves. 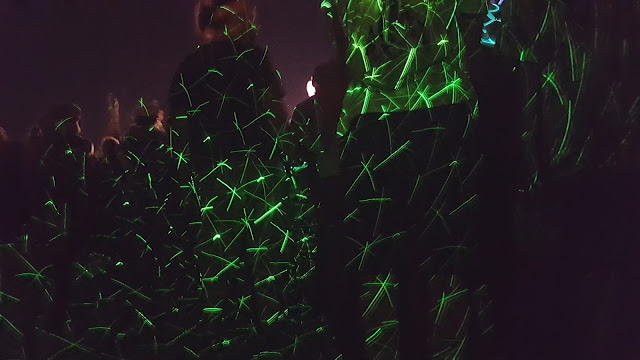 I'm standing in the middle of the concert field at the What Stage and listening to Deadmau5. It's the first time I'm seeing him and I'm impressed at the volume of people he's drawn. The What Stage is pretty full. I also notice that a lot of these folks are, uh, medicated. Good times.


So, I head back into Centeroo and I'm walking through Planet Roo when I find a strewn mess on the ground. When I put it all together it is the contents of a woman's purse/bag, sans wallet or a phone. Everything else you'd expect - sunglasses, sunblock, lip moisturizer, makeup, Kotex, cigarettes, and a tattered Bonnaroo schedule ... it didn't look good. I took it to lost and found, (the fold-up sunglasses were nice), hopeful that the owner got something back from what looks like theft. Yikes.

Back in the booth tent and resting on the cot. Even with earplugs, the bass from the Kallopie stage vibrates through my body. The music plays until 6am and I feel every bit of it. Still, I'm sleeping in Centeroo and that was always my goal ... but how do I sleep when my chest cavity is pulsating every 10 seconds? Ooh, did it stop? ... ahhhhh, I think it stopped, it's so quiet ... [THE BEAT DROPS].