It's morning and we pull in for gas. The dry-ice cooler is frozen solid but the beer cooler needs attention. Luckily, igloocoolers.com make it easy.
The road to Roo takes us around a neighborhood and through the security gate.
The VIP entry process is the same, two guys search the rig while we get checked-in. We spill out in front of the What Stage and park in an RV row along a vast field which quickly fills in with rigs of all sizes. Generators buzz everywhere. We crank up the a/c and get ready for a long day. After some rest, I get my gear together, fill my pockets with stickers and head toward Centeroo.

The VIP Camp lounge has bean bags and floor pillows scattered about. A table nearby has a row of laptops with internet access and a bar sits at the far end. Outside are trailers with a/c and rows of toilets and sinks.


It's after lunch and Centeroo is green from the recent rain. It's not crowded yet and everyone is excited. First stop is the Cinema Tent to get a good seat for the Reno 911 show. After 40-minutes in line we figure out that VIP bracelets can just walk-in. Also, the 1st two rows are reserved for VIP only. Sweet!

Rock the Earth: Revolution - Cinema Tent - 2:00 - With director Rob Stewart. We sit down about 20-minutes in. The movie is a true-story journey following this guy over four years and 15 countries as he shows examples of climate change, environmental degradation, species loss, ocean acidification, pollution, and food/water scarcity. It is totally fucking depressing. Outside it rains hard periodically as if mother nature is punctuating the point. I'm glad to be dry and in the a/c but we're all gonna die. :(

Reno 911 Sheriff's Department's Bonnaroo Drug Safety Seminar with Lt. Jim Dangle and Deputy Travis Junior - Cinema Tent - 4:20 - These guys are hilarious. Their drug seminar offers valuable tips like: "Whippits are legal." "There are only two kinds of handcuff keys and they’re both easy to buy online." "Cops love when you talk about the ACLU."

They sing a grade school song about the dangers of Methamphetamine while revealing the recipe. They then introduce the first screening which is the Reno 911 pilot episode. The actors do double duty as bad guys and it's awkward and raw but still funny as hell. The next demo is a crazy-ass space show called 'Alabama.' Think 'stolen sex-robot vaginas' and Eddie Izzard with omnipotent powers. It's so good. At the end, the guys stay to take pictures with everyone individually. I skip the line and head back outside. You can't even tell it rained.


I go check out the VIP lounge nearby next to the Which Stage. It's a large air-conditioned tent with air hockey & table tennis and plenty of floor pillows. Out back are air conditioned bathrooms. They are giving away free min-Ben & Jerry's and I choose peanut butter banana. So far, this VIP shit is pretty nice.


I spend some time walking through Centeroo, getting reacquainted with my favorite place and handing out stickers. 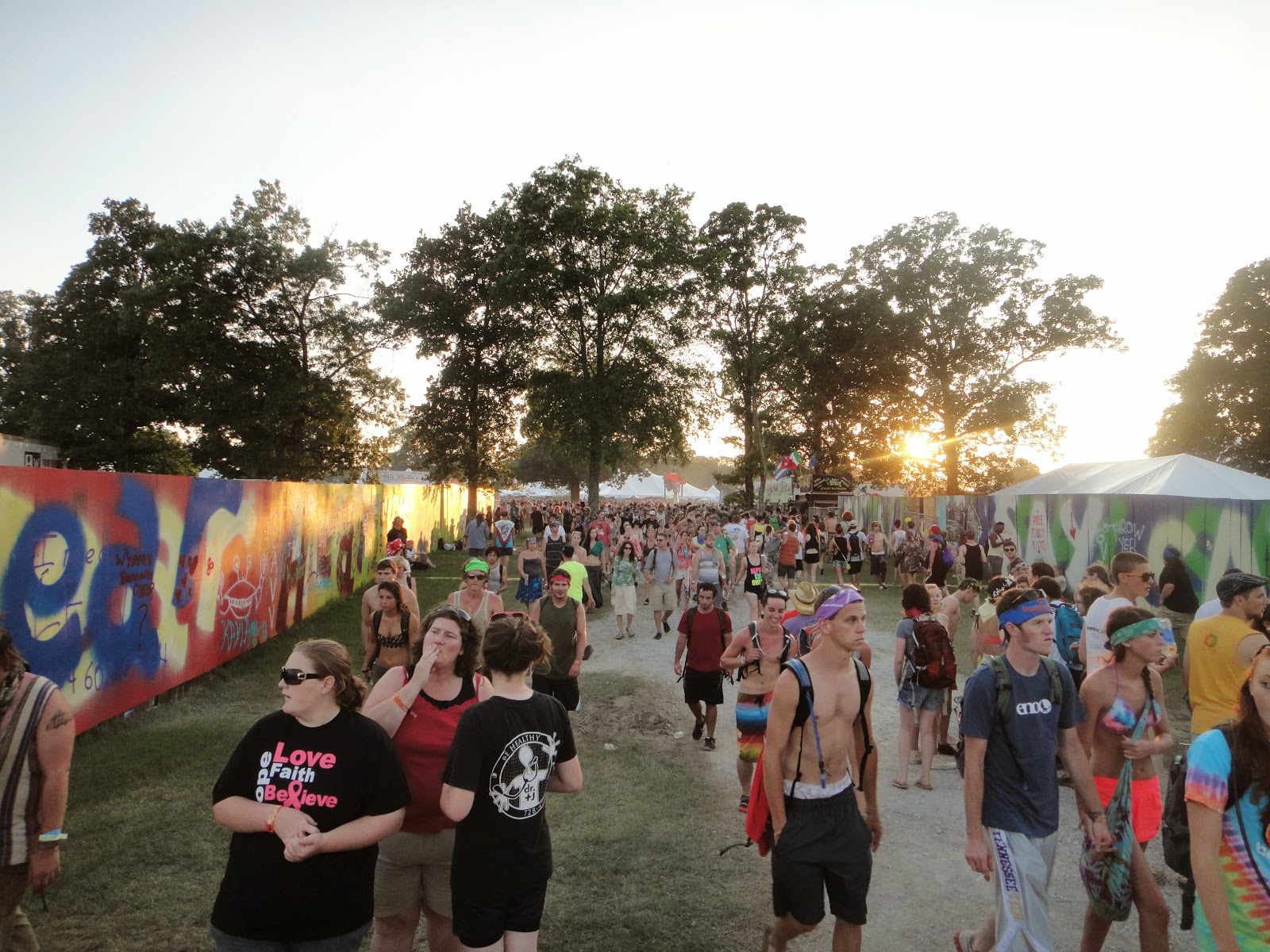 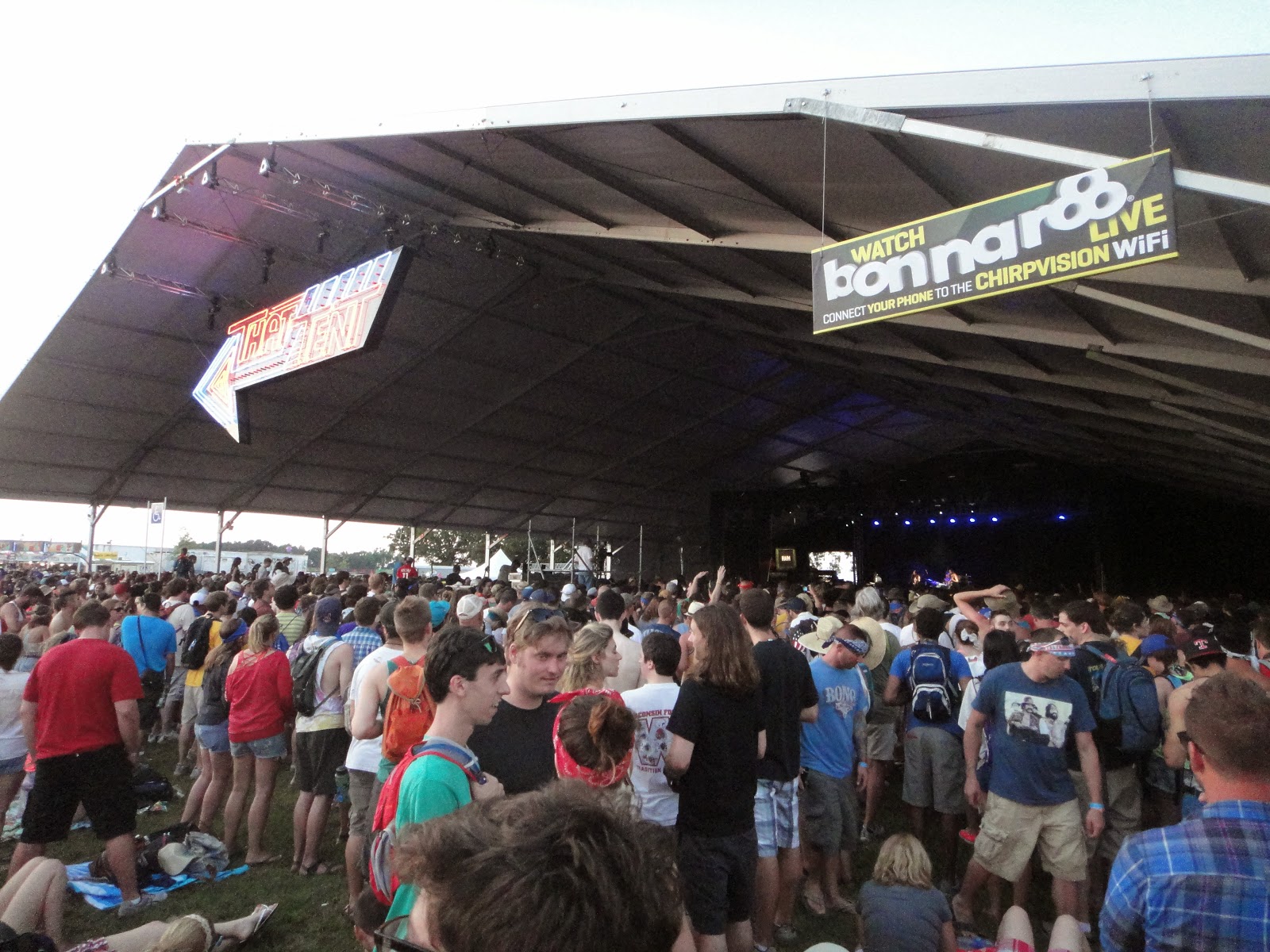 Haim
FIRST SHOW! Haim - That Tent - 7:30
I pull in to catch their set. It's not too crowded and the girls sound great. I've been listening to them on Spotify for awhile now and they're even better live.


Deap Valley - This Tent - 8:30
I catch a few songs. Some badass White Stripesy-kinda funk going on here. I dig it.


Djang Django - That Tent - 9:00 - It's crowded but I love these guys so I get as close as I can and enjoy every second of their crazy rhythms.

Sidetrack to the RV and on the way back, Paul McCartney is warming up on the What Stage. Horse-mounted police block the entrance but I can see the jumbotrons and hear him clear as a day. I hear “Penny Lane” and a song where he sings the word 'Bonnaroo' over and over. 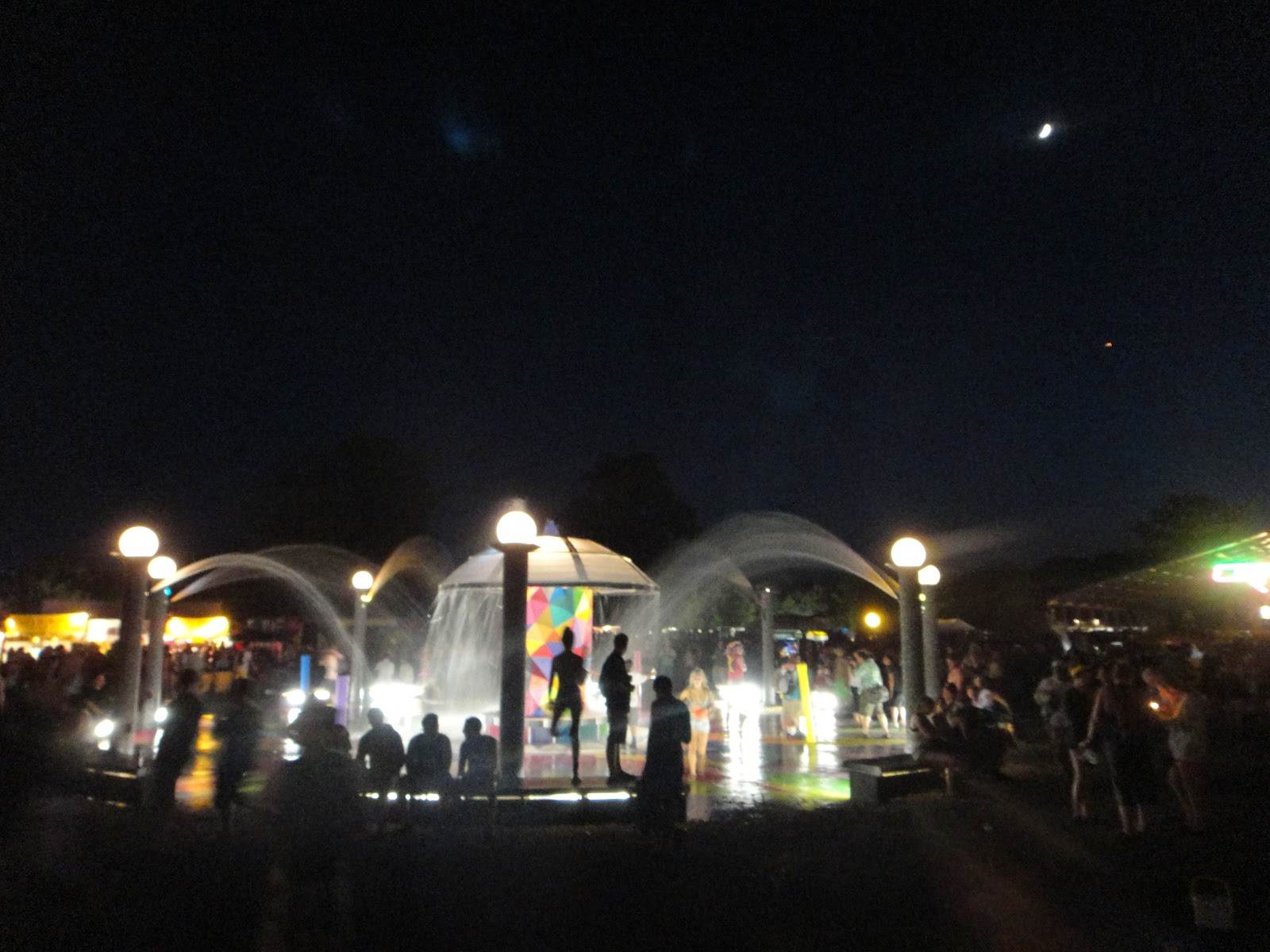 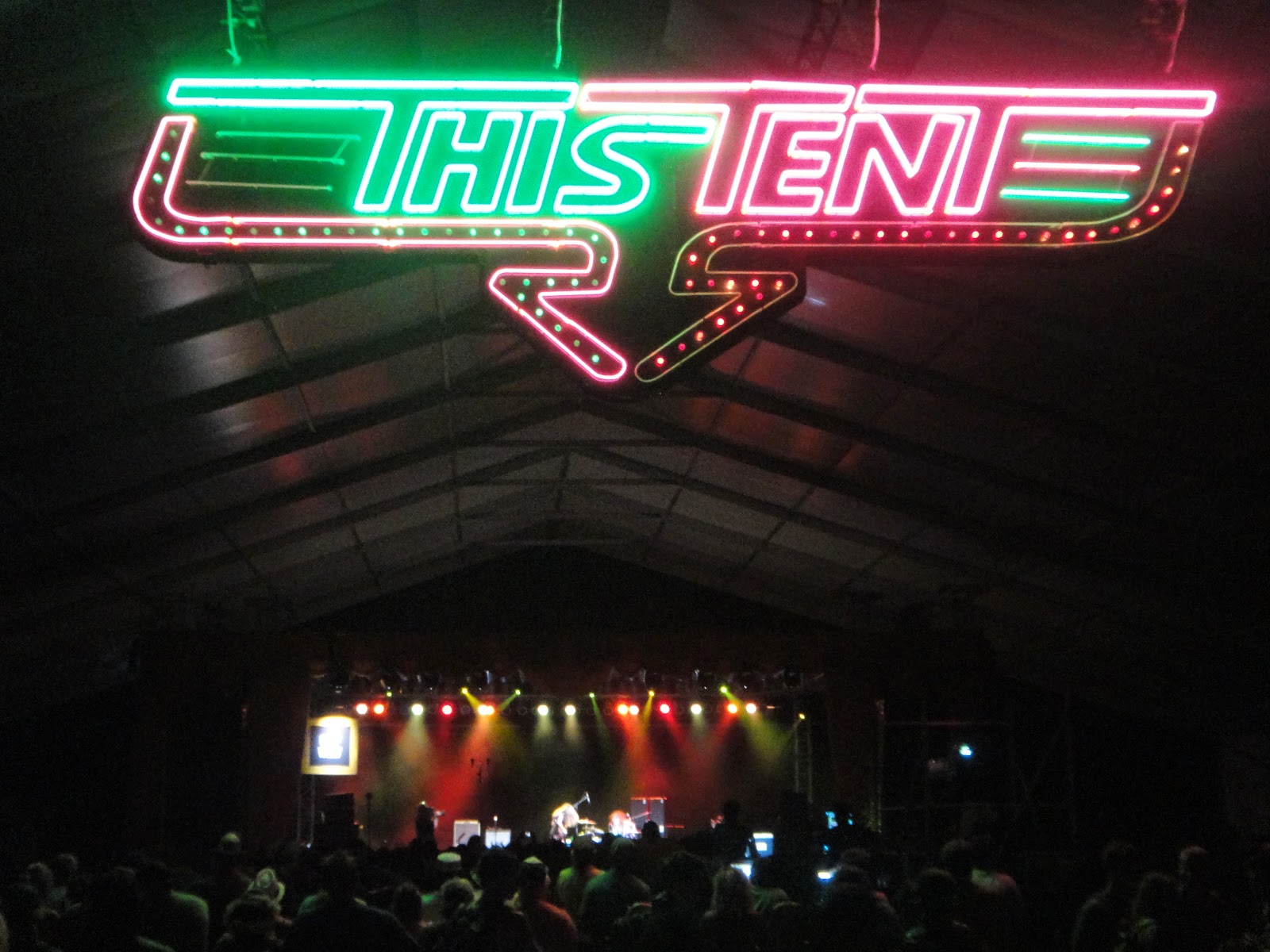 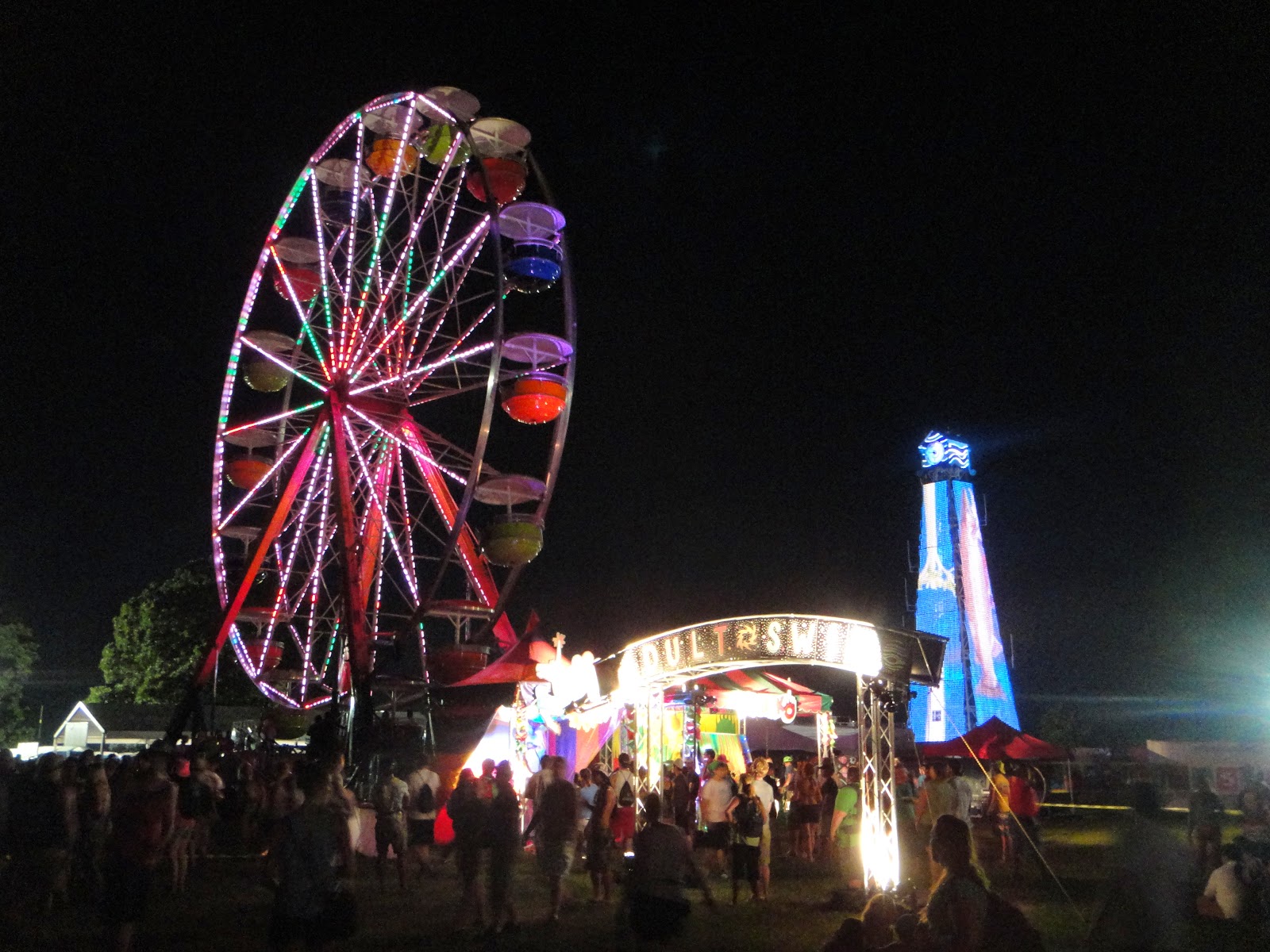 Father John Misty - That Tent - 10:30
I'm late and regretting it. This guy is GOOD. Father John soothes the Bonnaroo beast so effortlessly. Go see this guy!

Setlist: Funtimes in Babylon; Only Son of the Ladiesman; Nancy From Now On; I'm Writing a Novel; I Love You, Honeybear; This is Sally Hatchet; Well, You Can Do It Without Me; Now I'm Learning to Love the War; Tee Pees 1-12; Everyman Needs a Companion; Hollywood Forever Cemetery Sings

Alt-J - This Tent - 11:30
One of the most crowded Thursday night sets I've seen. They blister through their album making me glad I'm wearing earplugs. A group of trippers has made a happy perimeter of glowsticks for safety. None of them venture outside of it.


I hit the free VIP showers around 1:30 am. The trailer is empty save for one guy who is finishing up. They're the same size as the regular showers but an air conditioner sits at one end. Bunches of semi-empty shampoo containers are stuffed everywhere. The water is hot.

Back to the RV. Zzzzzzzzz.