Bonnaroo Chris heads to the Farm once again in 2012.
Did someone say Radiohead? 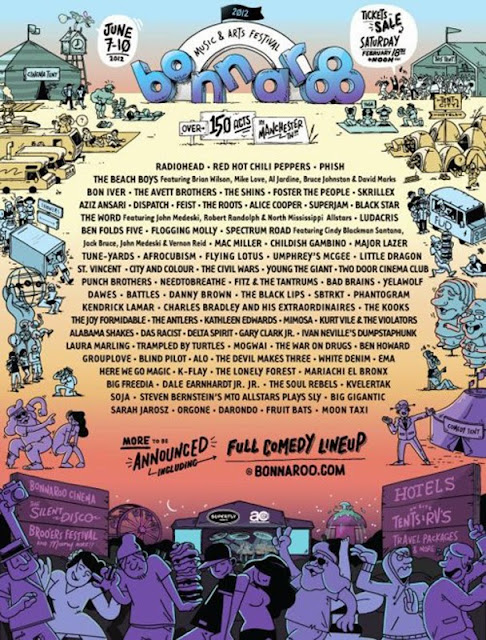 We picked up Decker (formally known as Matt 2) at 7:15 am and drove 3.5 hours to pick up the RV. (Sidenote: The rental place asked us the day before if we could switch our pickup location - with compensation for mileage and fuel - then gave us the wrong RV, so we had to turn around and load everything into RV #2. I'm tired from just typing it.)

Then it was off through the state of Georgia. Georgia had every law enforcement at its disposal sitting on the highway. I was pulled over and ultimately let go after an inquiry as to how long I had been wearing my seatbelt. "Florida," I replied. Clearly, they were investigating more than just my seatbelt. This would be the only 'bump in the road' on the drive up. The RV handled very well and burned through two gas fill-ups. Speaking of burning, the motor got unbelievably hot on the passenger side. Not sure what that was about!


We neared Manchester a bit after sunset and waited a mindblowing 15-minutes to get to the entry checkpoint. No line of cars upon entry to the Farm. WTF?! They gave a quick search of the vehicle and directed us just inside the gate while we waited for the rest of the team. They were not far behind us but had been selected for a free random security search.  Once complete, the team was directed to the RV campground, Vincent Vega. We were settled by 10 pm. It got down to 54° that night so the a/c was not needed. I brought a blanket. It was cozy.

Team Roo:
Raylon - an invaluable friend who's been to Roo with me a few times.
Jacqlyn - a spunky gypsy who stayed with us briefly. Even Gumby succumbed to her charms.
Decker - rode with us last year. He's awesome.
Ryan & Barbara - met up with us from Dallas, TX and were the definition of 'southern hospitality'. Two of the nicest people on the planet.
And me - Concert junkie.


BTW, our neighbor to the east was Ray, who camped in his badass black freight truck. To the west were Pat, Evan, Michael and couple other guys from Indianapolis. They were all great camp neighbors.