Up at 8am to turn on the generator and a/c. Slept in until 11:00 and loved every second.

The line into Centeroo is the longest its ever been.


Tune-Yards - 1:45 pm
My first act of the day. I spent the first half of the set acquiring a shady spot to sit. The band had a tribal thing going on, which probably explains why I ended up with body paint on my face.


Cell service was chaotic. I would have posted more from the festival but I was on-the-go and my phone was not cooperating. Perhaps I should just leave my phone behind? Nah. 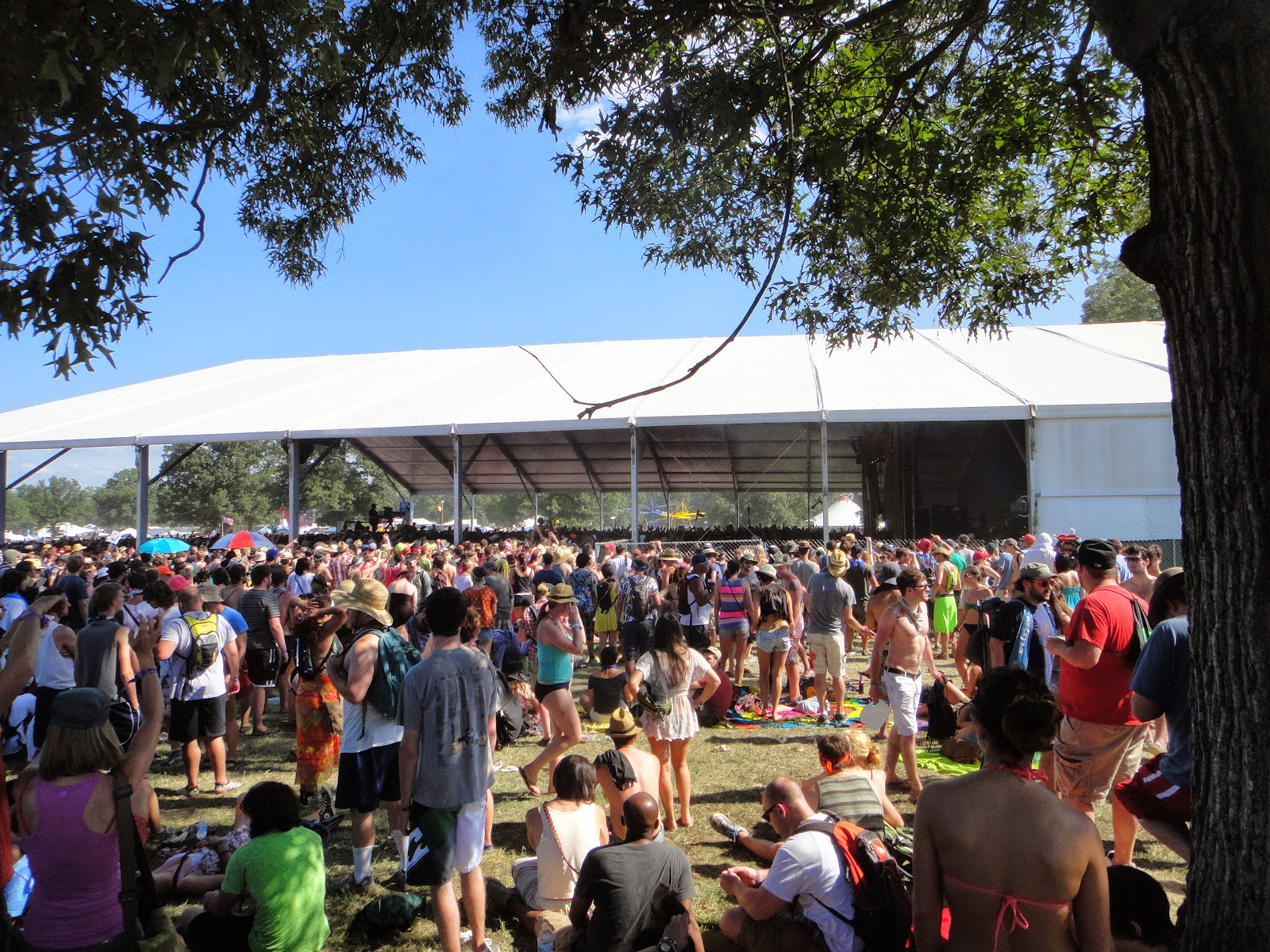 Two Door Cinema Club - 3:15 pm
This band was up-tempo and fun. More importantly, I sat in a comfortable seat, soaking in the sights of people going to-and-fro, listening to this kick-ass dance/punk band doing their thing.

SETLIST: Cigarettes In The Theatre; Undercover Martyn; Do You Want It All?; This Is The Life; Wake Up; Something Good Can Work; You're Not Stubborn; This Is Moon; Costume Party; Handshake; Eat That Up, It's Good For You; What You Know; Sleep Alone; Come Back Home; I Can Talk

Fitz & the Tantrums - 5:00 pm
I'm a fan of this act and this was my first time seeing them live. Their unique sound came through loud and clear to a terrific crowd. Their cover of 'Steady As She Goes' by The Raconteurs rocked the tent. Totally fun band.

SETLIST: Don't Gotta Work It Out; Winds of Change; Pickin' Up the Pieces; Wake Up; Breakin' the Chains of Love; Rich Girls; The End; Steady As She Goes (The Raconteurs cover); Tighter; 6 AM; L.O.V.; Dear Mr. President; News 4 U; Sweet Dreams (Eurythmics cover); MoneyGrabber

Sidenote: Signed up for a Relix Magazine subscription for $20.

Feist - 6:15 pm
Feist gets the Best Dressed Award for the festival. Her red dress, wide-brimmed hat and movie-star sunglasses fit perfectly on the Which Stage. She was sweet and her voice kind of reminds of Phoebe from 'Friends'. The Which Stage sound issues from 2011 were corrected. Every tent and stage sounded great.

Found a couple sleeping on the ground together. Left them two stickers.


Rodrigo y Gabriela
Amazing! I wasn't sure what to expect but this band is EXTREMELY talented. TOOL's 'The Pot' was playing as they came on stage and as it faded away, these guys picked up where it left off. Gabriela, [I assume], played percussion on the guitar WHILE playing said guitar. Plus, lots of other amazing techniques that I didn't even realize were happening. Beautiful.

Foster the People
I got to see the one of the more popular bands currently on the radio along with everyone else, if the crowd was an indication. The singer kind of rambled for a bit. They sounded great! I left near the end of Pumped Up Kicks to head to the What Stage.

Radiohead - 10:00 pm
Having seen this band a couple months prior, I was quite content finding a comfortable spot and let the music melt into my brain. Their light show was ridiculously bright and kinetic. They gave a mysterious shout out to Jack White. And another to the The Chili Peppers, who were in attendance. Two encores. Great artists, these guys.

SETLIST: Bloom; 15 Step; Kid A; Weird Fishes/Arpeggi; Staircase; The Daily Mail; I Might Be Wrong; The Gloaming; Separator; Nude; Morning Mr. Magpie; Identikit; Lotus Flower; There There; Karma Police; Feral; Idioteque. Encore: You and Whose Army?; House of Cards; Supercollider; (Thom Yorke dedicated song to Jack White); Bodysnatchers; Everything In Its Right Place. Encore 2: Give Up the Ghost; Reckoner (Thom Yorke dedicated song to the Chili Peppers); Paranoid Android

Black Star - 12:30 am
They started way late. Not a huge fan but this was unique opportunity. The late start sucked but they finally came out swinging. Lots of devoted fans. It was fun. And it made for an awesome picture.

The Word
They were playing at The Other Tent, which was on my way out. I had no idea what this band was about. Needless to say, when I got nearby I had to pull over to catch some of the set. [How could you not?] It was lively and perfect, and when I finally headed back to camp, the music followed me along the chilly dirt road.