I get up early and spend $7 on a shower. I realize the sign says 'cold water only', (I could have waited for a hot one), but I figure it has to be ok since it's sweltering hot outside. The water is so cold it takes my breath away. I take it like a man and it is extremely refreshing. I am so awake.

In Centeroo a little after 10:00 am. Walking past This Tent and the massive amount of trash left behind from the night before. Plastic beer and water bottles. Cups. Wrappers. Glow sticks. Condoms. Sunglasses. A shoe. So disgusting. Really glad my KEEN Footwear sandals are closed toe.
We get in line at the Comedy Tent. The line is sparse but builds quickly. We talk to a volunteer who mentioned she works three 6-hour shifts in return for a ticket and meal comps. Not bad.


For the air-conditioned comedy shows, you have to get in line two hours prior to the show that you want to see - just to get tickets. Once you have a ticket, you can come back at show time to get a seat. We hit Food Truck Row. I get a unicorn burger that is quite amazing. I also discovered the amazing tacos and burritos from the Taco Bus. Being from the Tampa Bay area, I will go home and fall in love with the food of this truck and have it all the time. 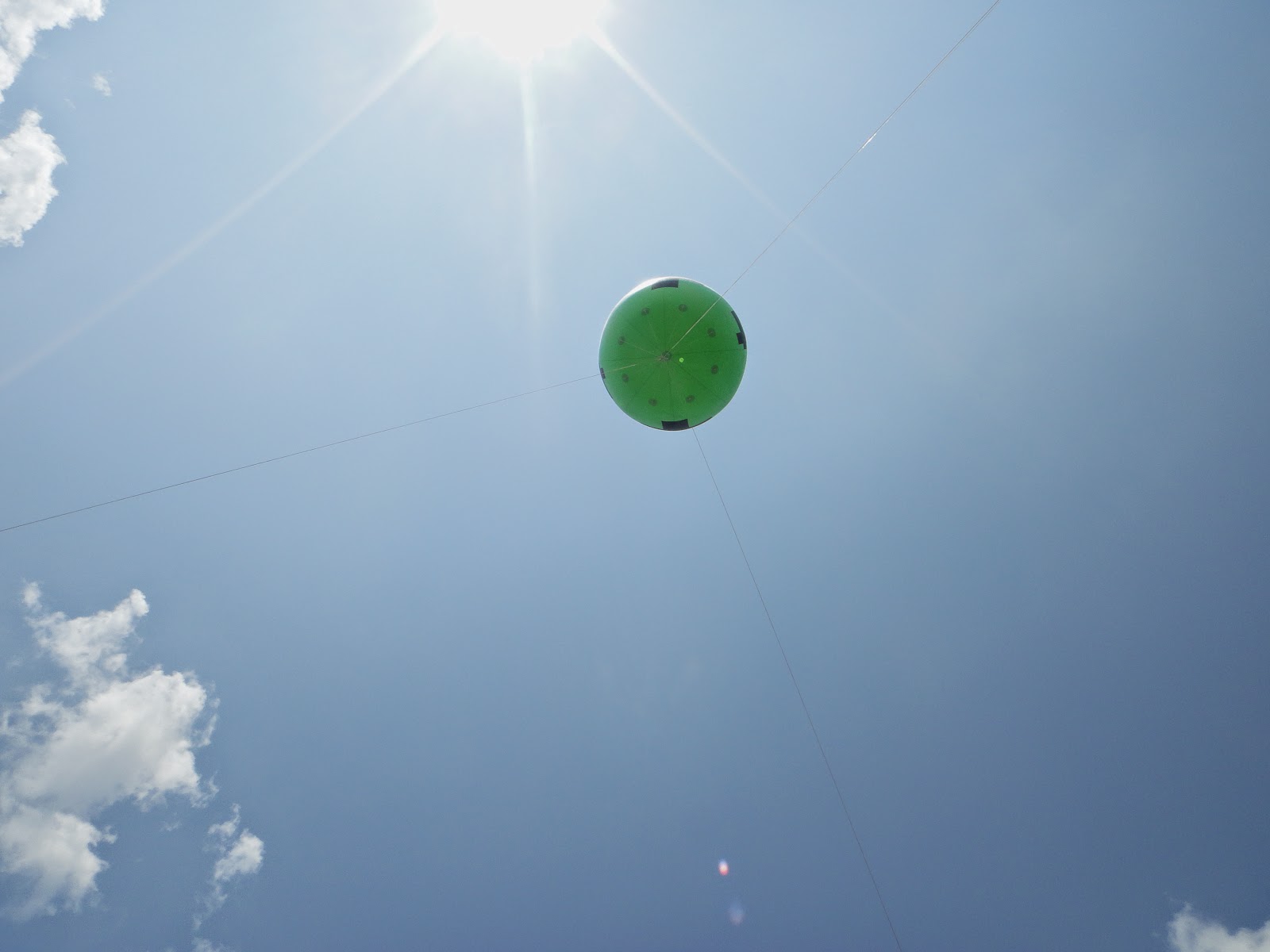 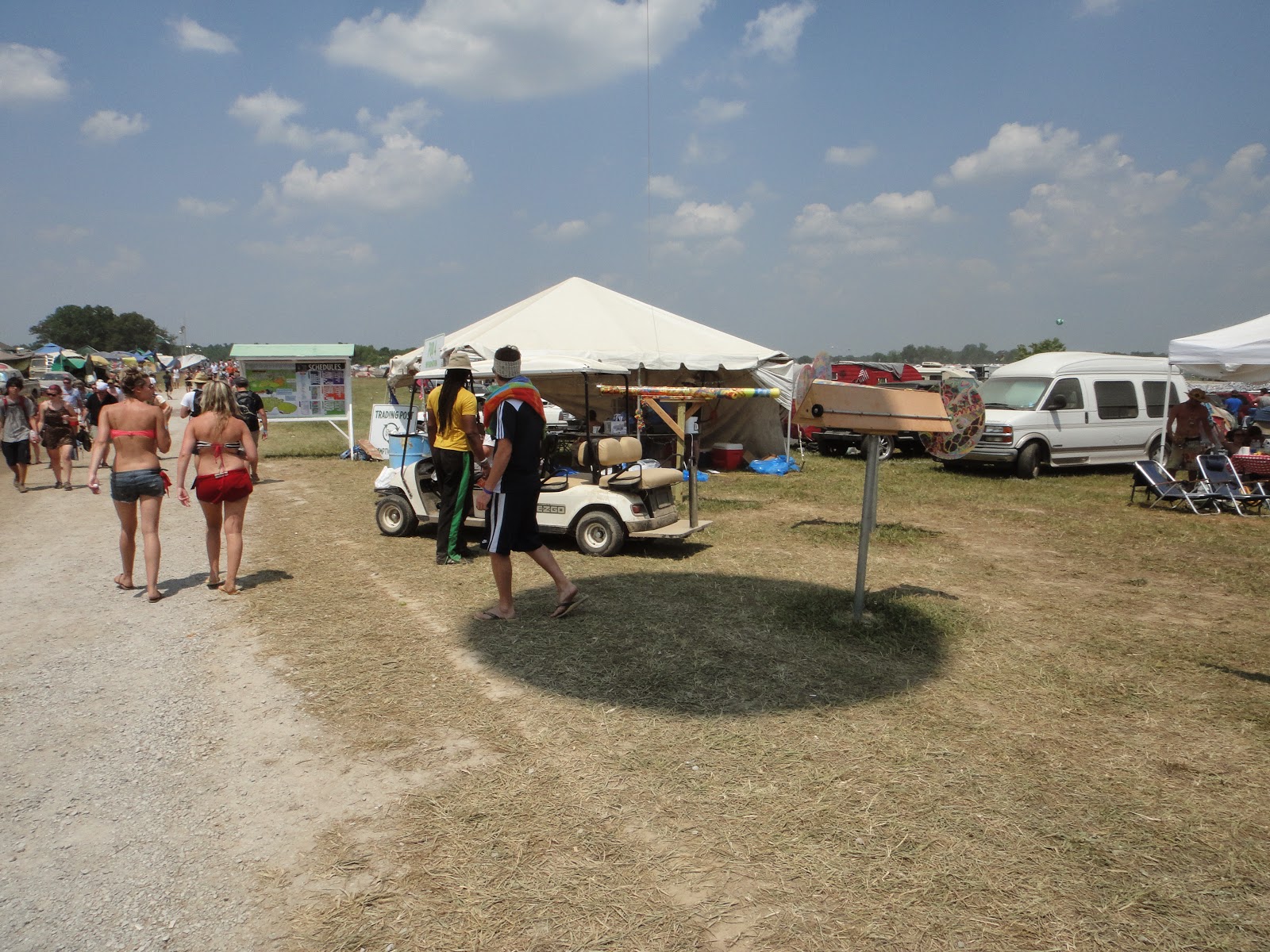 In line for Henson Alternative's Stuffed & Unstrung at the Comedy Tent. The line is long and the people next us smoke a joint openly. We are allowed to enter the tent and grab seats four-rows from the stage. The air conditioning is lovely.

It's an improv show featuring puppeteers led by Brian Henson, (Jim's Henson's son). They make it up as they go using suggestions from the audience. Patrick Bristow makes for an excellent host as he gathers suggestions for the audience and cracks jokes appropriately.

But the real magic is the puppets and puppeteers. Large screens on either side of the stage show the puppets in action. The camera is 6-ft up in the air directly in front of them but it does not block the audience's view. There are six puppeteers and nearly 100 puppets for them to choose from.

To complicate matters, they look down the whole time at screens to watch the actions of their puppet. Except everything they do is in reverse to what they see. Of course, they're trained to it and make it look easy, but it's impressive to watch. Also, the show is rated R. One skit has demented bunnies raping a cow and then a zombie. Later, a raunchy version of a Lady Gaga song, music video style.

They also performed two classic pieces that had not been performed live in 30+ years. It is an extraordinary show and they got a standing ovation at the end. I highly recommend you catch their tour if you can.

Next, we hit the giant waterslide. Twice. The guy at the bottom with the hose asks if I want the full body spray or just my feet. I say 'just my feet.' He gives me both and laughs. He does this to everyone.

After some downtime at the campsite, we're back to watch Portugal. The Man at That Tent. The crowd is just as thick as the dust cloud. The band sounds great. In a little while we head to the Which Stage for Mumford & Sons. Raylon and I plunk down in our chairs in the middle of the crowd. Everyone around us is standing and it's so freaking hot. The sound is so bad, we don't even realize the band has started. Everyone shouts 'Turn it up!' between songs. It's too crowded to get any closer. 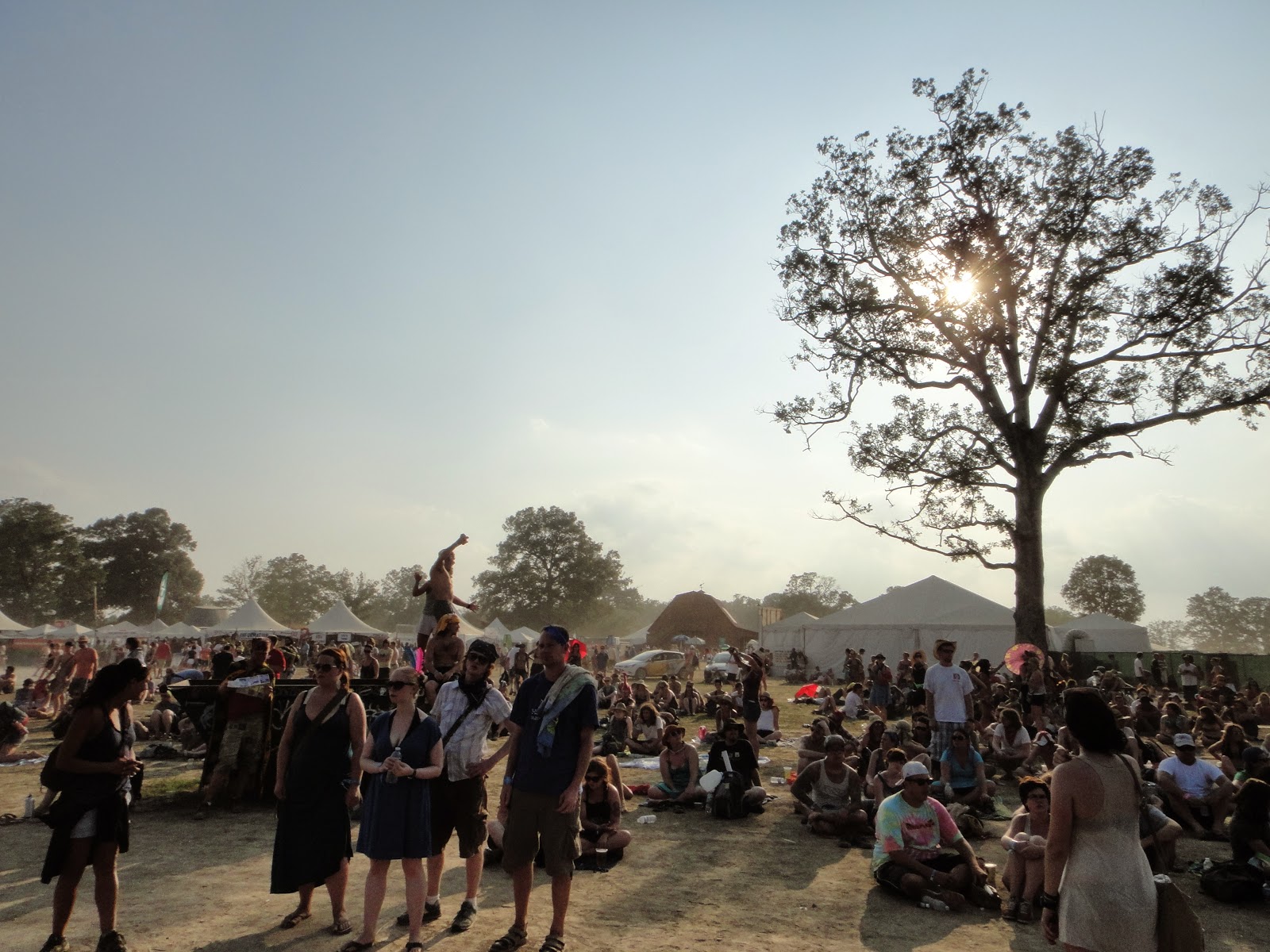 We finally bail and go to This Tent to listen to !!! who are quite energetic and sound great. Then it's time to get to the What Stage for The Black Keys. The sound was perfect and they played a slew of popular songs. Points off, however, for ending early and no encore.

A thunderstorm crackles nearby. We leave and go back to the site to sit and have a cold beer.

I'm back at the What Stage to watch Eminem. I'm far away from the stage and sitting in a chair. I'm not a huge rap guy but the beauty of Bonnaroo is being able to see legends of other genres.

He's loud and ferocious and ends one song with a gunshot. Tons of people know his songs by heart. I recognize a couple of them. 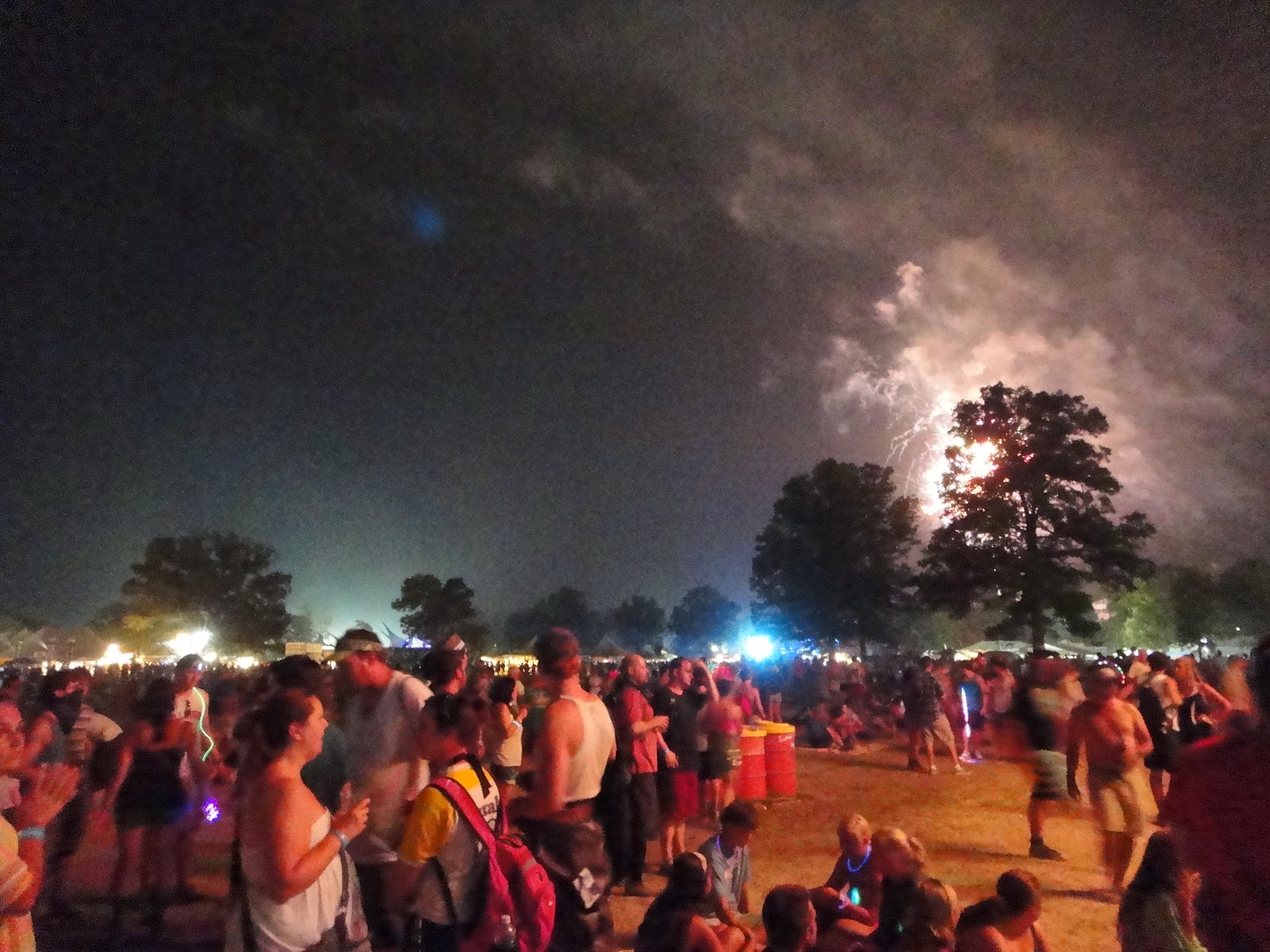 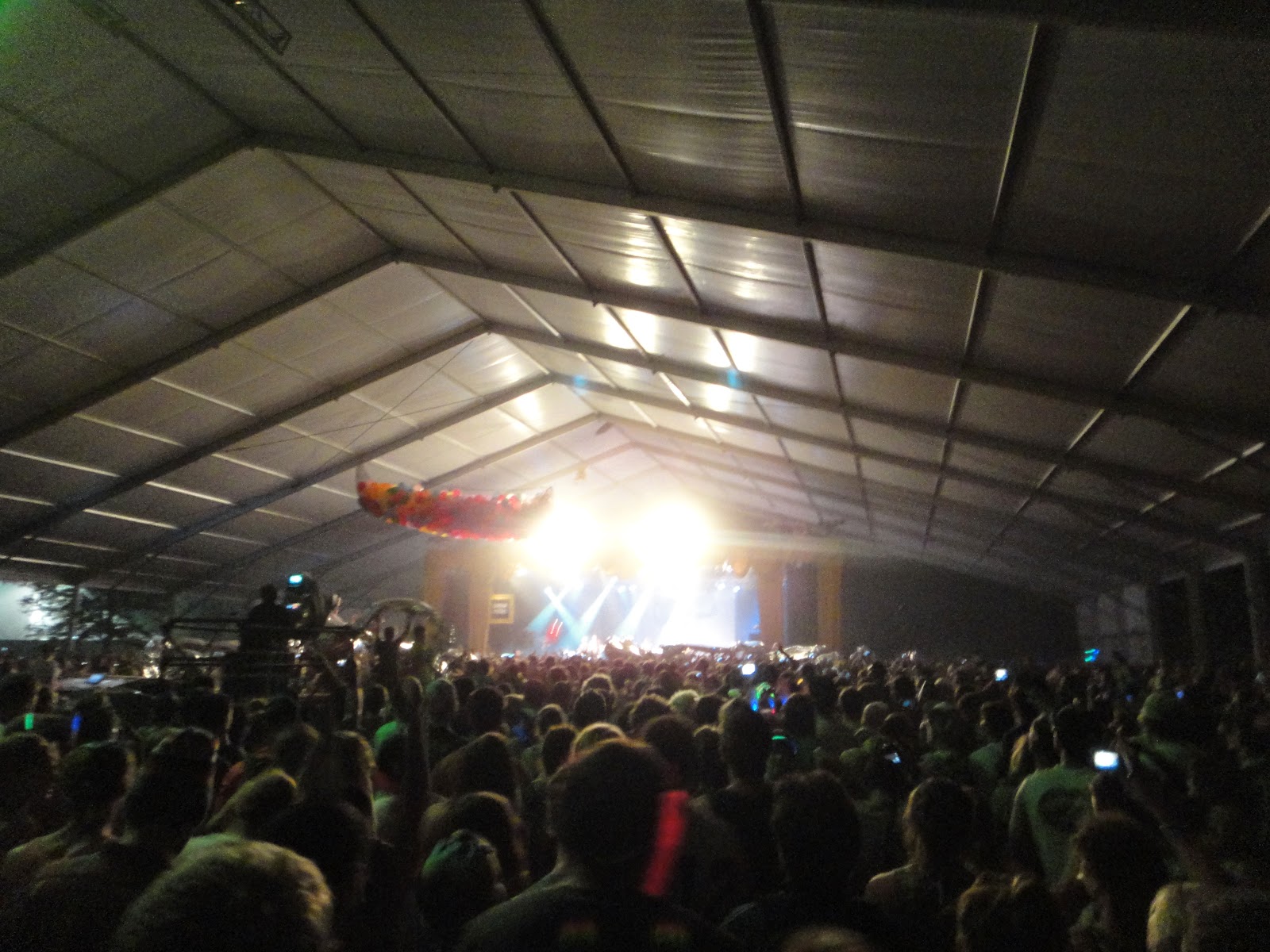 I head to This Tent to see the Scissor Sisters in all of their crazy-loud disco-boogie glory. The crowd goes nuts.

I cap off the night with the rhythm and beats of Omar Souleyman. The dancers out front twirl and jump, creating a small sand storm.

Time to head back. The short rain helps quell the dust a little bit. Music is constant in the distance. I put in earplugs and don't remember dreaming anything. 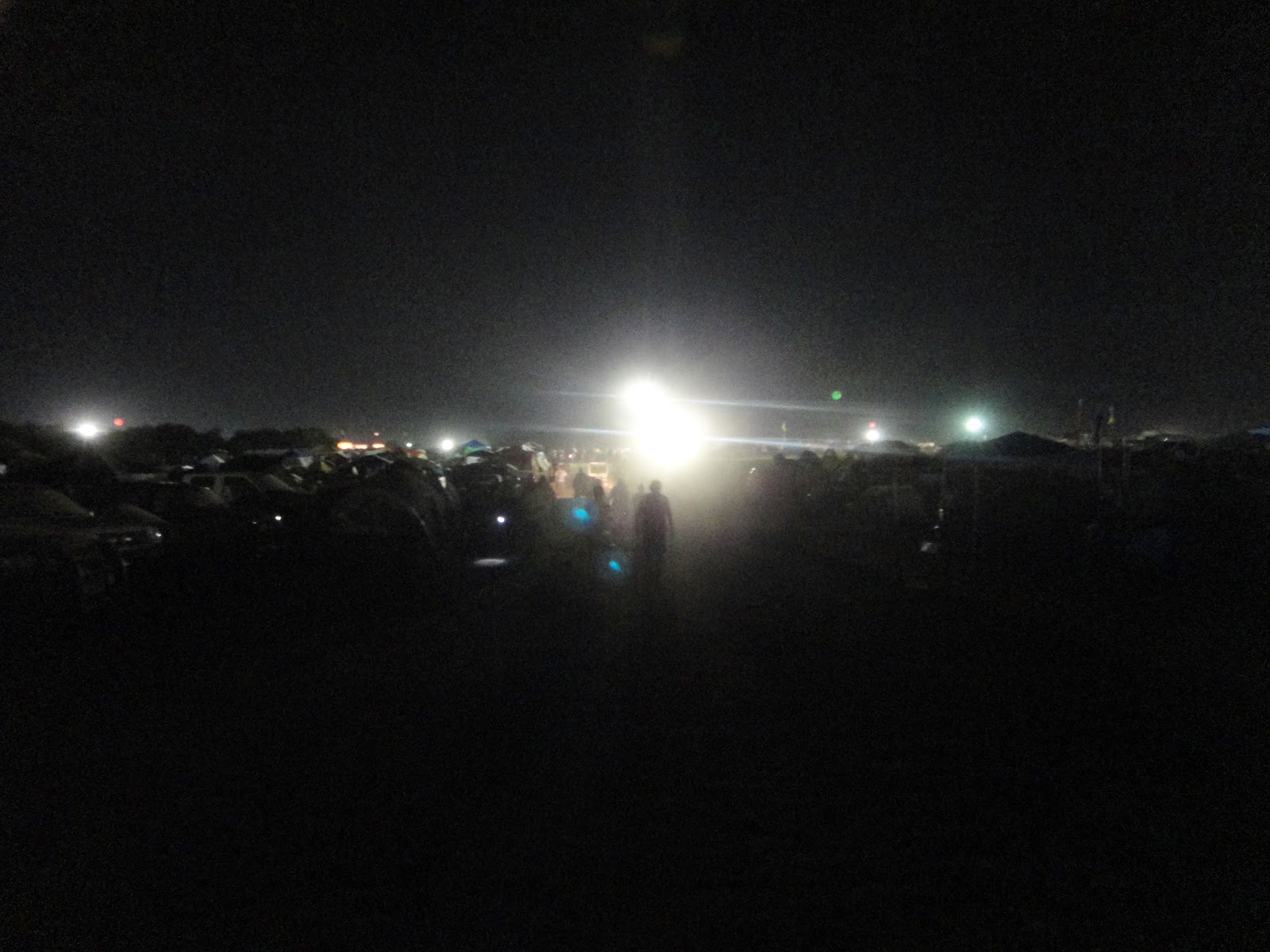