After a one-year hiatus, Bonnaroo Chris makes it back for 2010.
Still the same but different. 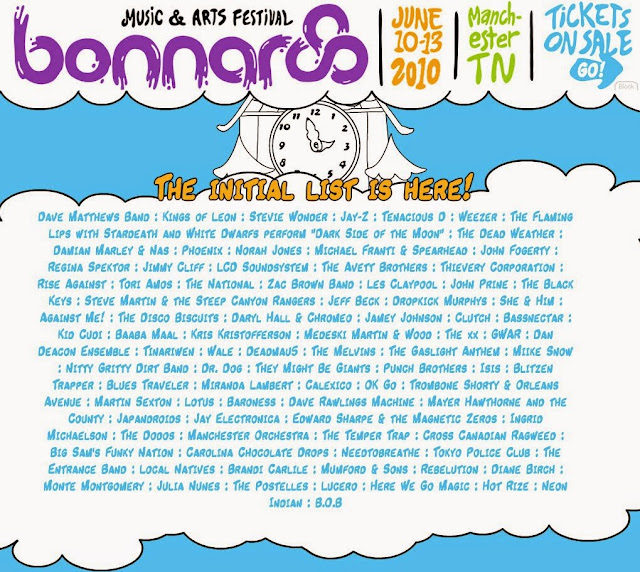 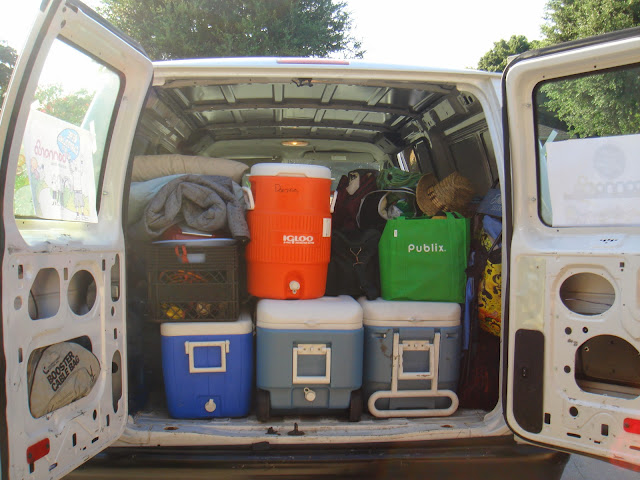 The road to Bonnaroo began Wednesday, June 9th at 8pm after a quick dinner at Mi Pueblo. Raylon, Beth, Anna and I had stopped at Publix and filled a large cooler with ice above a layer of dry ice. Thank you, igloocoolers.com! We had filled a cargo van with tents, tarps, food, and two reclining lawn chairs, set sidewise, for the other two passengers.

We cheers'd to a successful trip and Team Roo took off to Manchester, TN. The trip took roughly 11 hours which included a detour to 30 miles north of Chattanooga and breakfast at a rowdy Waffle House. We had passed exit 127 when we came upon the vast line of cars pulled onto the shoulder. We were 6 hours from getting in.

Turns out, Manchester received a crapload of rain the day previous and Bonnaroo was scrambling as 80,000 people descended on, what could of been, a serious mud pit. We passed the time with music, peeing on the side of the road, watching a service truck get stuck trying to shortcut through the median and taking pictures of our position through binoculars.


Motorcycle cops patrolled the shoulder continuously. They asked people to get off the roof of the vehicles and awoke sleeping drivers who had traveled all night. The line of cars was never ending. They lined both sides of the highway as Bonnaroo diverted southbound traffic to an exit and merged them with our line.

Finally, our exit emerged. The poor guy stuck with searching cars was thankful when I said I had been before. "Coolers are in the back," I said. We had already cleared them off for inspection. He found nothing amiss except my hatchet which he had to confiscate. I didn't argue the matter and it would be the only thing I lost during the trip.


Armbands applied, we wound our way through to Camp Han Solo where we got a nice plot of land with enough space for our needs. We covered our tents with large tarps to create much welcome shade.


We were a 10-minute walk to Centeroo and a two-minute walk to porta potties, showers and water supply. Later we would find out we were well within earshot of certain stages.

Our neighbors were great. To the right were Tim, Jessie and Conti, who were from New York. They were cheerful and we enjoyed their company. They enjoyed our shade.   Not sure where the neighbors on the other side were from and they were rarely about. We would see them briefly in the morning and they would be off - until the next day.

We headed into Centeroo and I met a man named Gesus, a graffiti artist from south Florida. When asked about the inspiration of his work, (below) he spoke only of a recent suicide and keeping that memory alive. He was a veteran of Bonnaroo, coming for "good friends, good people and good vibes."  When I asked him about band(s) he was looking forward to, he said "Manchester Orchestra ... and," he predicted, "the Flaming Lips will be amazing."


One of the first bands to play was The Entrance Band, ironically, and they were great. Crazy, rocking sound, like The Doors but angrier. They were followed by Baroness, Local Natives and Neon Indian. Wasn't a big fan of Baroness, but I liked the others a lot.

I fell asleep around midnight listening to Dieselboy spinning techno in the distance. Not a particular style of music I normally listened to, but as I was forced, it wasn't that bad.