Bonnaroo Chris returns as a first time volunteer and brings a crew with him. 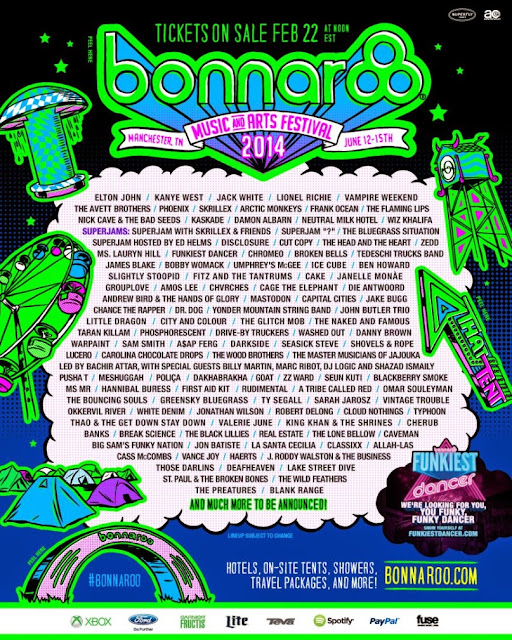 "You will be crammed in the back of a cargo van and it's an 11-hour trip both ways, and you're cool with that?"

I'm talking to two guys at my favorite rock climbing gym, Vertical Ventures. It's near the end of May. Louie spotted my Bonnaroo tattoo while I was climbing which sparked a conversation about the festival. He went two years ago as a volunteer and would consider doing it again. Coincidentally, I'm leading an 8-person team to the festival on behalf of the disaster relief charity, ShelterBox and I have a couple open slots. Louie talks to his friend Vinnie, who's also interested. It's a free ticket in exchange for a lot of work. I go through the trip details, including the cargo van, and ask them if they agree. They do.

I was excited to hear the response from my friend Alicia, with: "Holy shit! Yes!!!" Already on the team is fellow ShelterBox ambassador Ron, out of Michigan. He does computer stuff and he had never been to festival of this caliber. Also on the team are Ron's buddy, Toby, who lives in Nashville, and a Florida local named Ryan, aka chick magnet. Tom, out of Wisconsin, is the last team member as he fills a last-minute slot by responding to my Facebook post.

It's early and dark and I'm on the road with the cargo van to to pick up the team. I've setup two lawn chairs in the back with a third seat in the middle. They face sideways and have boxes and coolers between and behind - blocking everything in to prevent sliding back and forth. There will be five of us in the van total. After picking up the last two in Tampa, it's 7:45 am and we're headed to Tennessee.

A late lunch at Cracker Barrel. Georgia, Tennessee. Rain. Georgia, Tennessee. Rain. And it's here, when we are almost to Manchester, that we pass a state trooper parked along the highway. Seeing him pull out, I immediately move to the right lane. I'm not speeding (or breaking any law for that matter) but out-of-state plates are all it takes and this isn't my first trip to Roo. He comes up along side us and repeatedly looks into the vehicle then drops back to pull me over. He asks me to get out and stand in front of his cop car. "You didn't have your headlights on in the rain, which is the law." Yeah, maybe so, but I didn't have my windshield wipers on either so I'm thinking that's bullshit. But that's irrelevant because he can use any excuse he wants. Plus, I've got three non-seatbelted individuals (allegedly) in the back of my cargo van ... so, he's got the upper hand here. I tell him we are part of a volunteer team headed to the festival. He talks with the other team members and runs my license. And, finally, let's us go with "Have a safe trip." Thank you, officer. (I was also pulled over in 2012 for a 'seat belt check' and released.)

The mud slows the entry process down but it's cool to be on the roads backstage. We setup a tent in the dark amidst other volunteer campers and realize our tent takes up a lot of space, especially during setup. But it's finally raised and everyone gets the space they need. Ron makes an incredible chili and offers it to the neighbors and passerby's. He is a rockstar.  Ron and I also help a couple who is having issues with their rain fly. It takes a while before everyone drifts asleep. 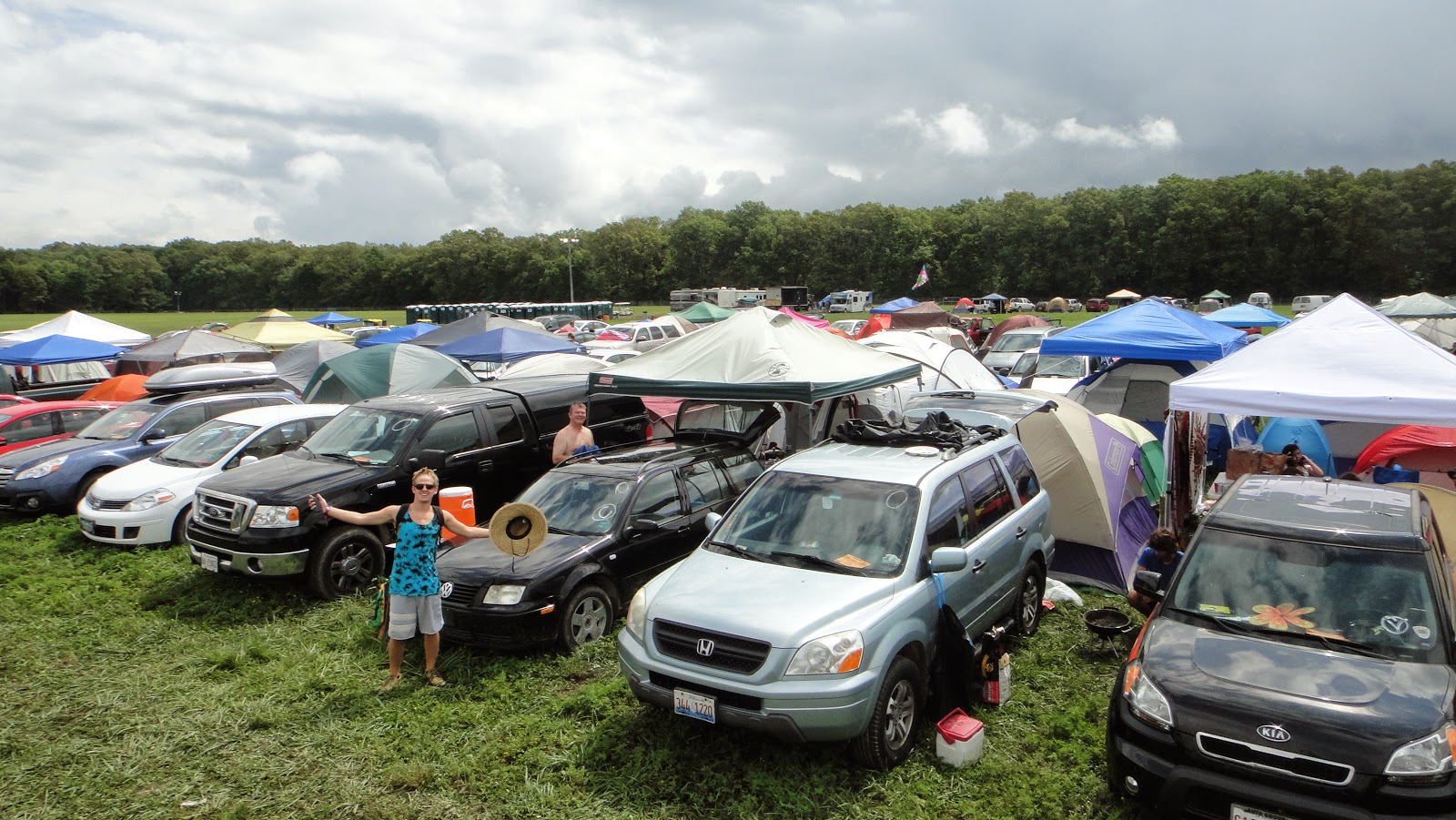 It's soupy early in the morning.

It eventually clears up but it makes for slow going. The long walk into Centeroo involves a large, impassable puddle. Some people go barefoot. I decided on wet shoes. Once inside Centeroo, it's time to setup the ShelterBox booth. BTW, none of the food vendors are open on Wednesday, though we managed to get a cup of coffee! 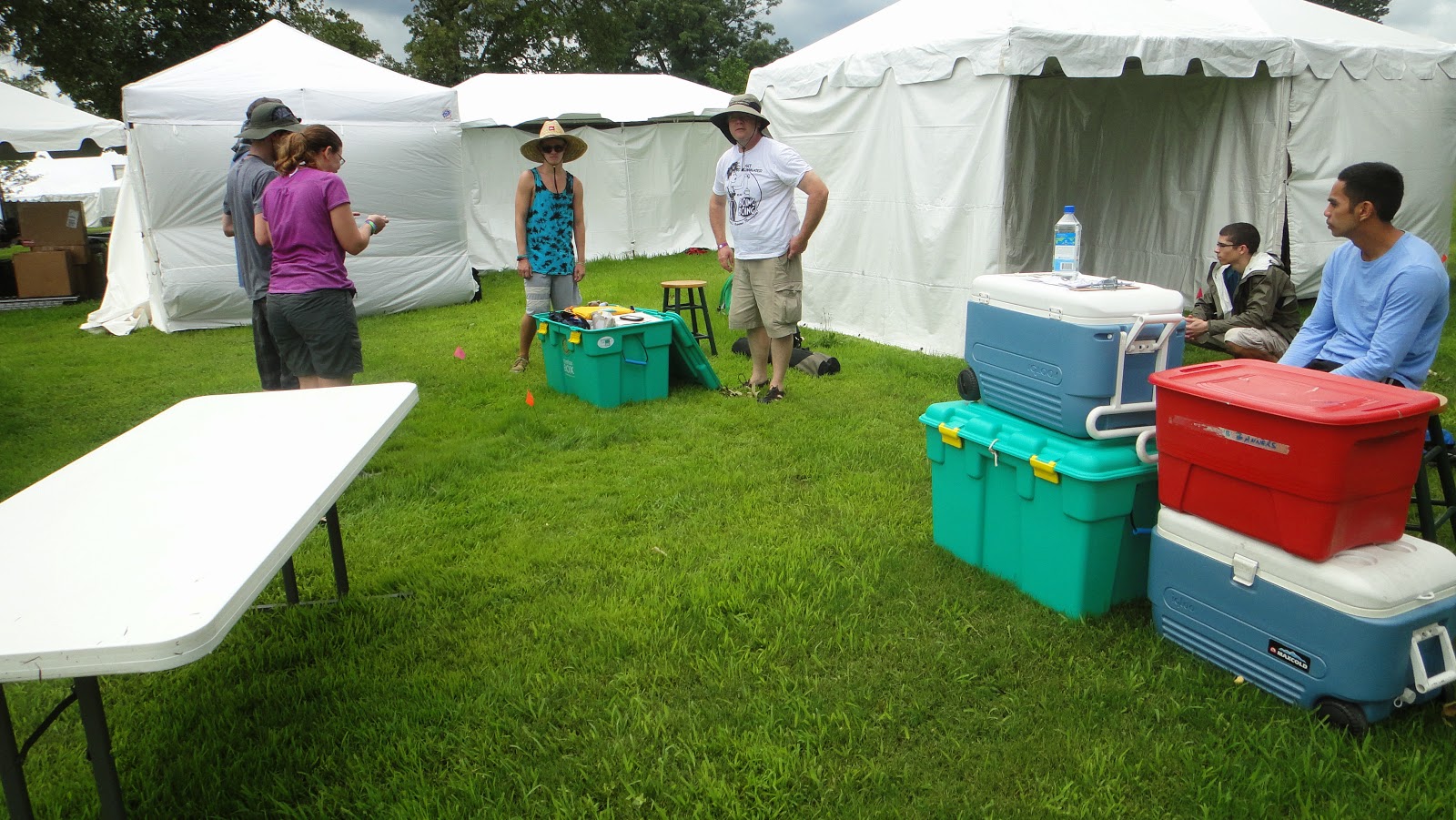 The sun is out when we get to Planet Roo. The ShelterBox we are unpacking is brand new. (This secretly means that everything fits in the box and it won't all go back in once it's removed.) The tent is beautiful and goes up easily. We use about 50-tent stakes so this thing is now stable in up to 70-mph winds and will stay dry in 6-inches of standing water. We are the only vendor in the section that isn't in a canopy tent and it stands out. Also, we are directly facing the Ben & Jerry's booth, which will come in handy later.

Once the setup is complete, most of the team heads back to the campsite. Some stick around as Bonnaroo has kindly offered a vendor happy hour, including a free keg. It's a neat networking moment as everyone here is representing something they are passionate about and we're all about to embark on this magical four-day event. It was a great ice breaker to meet the neighbors. The rain comes back and brings out a rainbow. 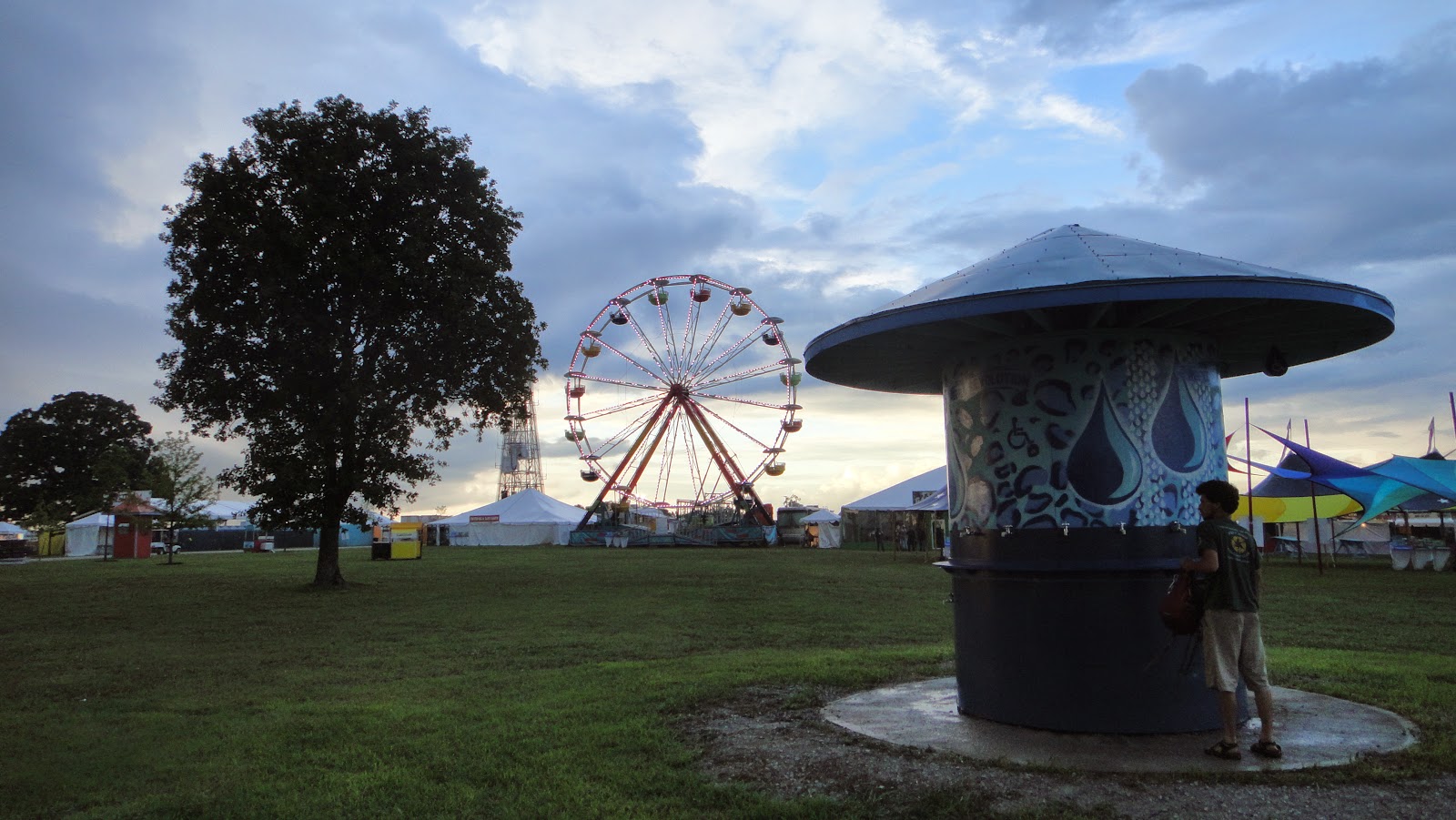 Later, I'm headed to my bunk, amazed at what is still being constructed. The Which & What stages looks like they're still being finished ... Meanwhile, the Comedy, Cinema and three big tents are ready to rock and roll. Sounds checks bounced back and forth all day. The sounds of cars and campers in distance can be heard. Excitement builds. The festival works through the night to meet the deadline. 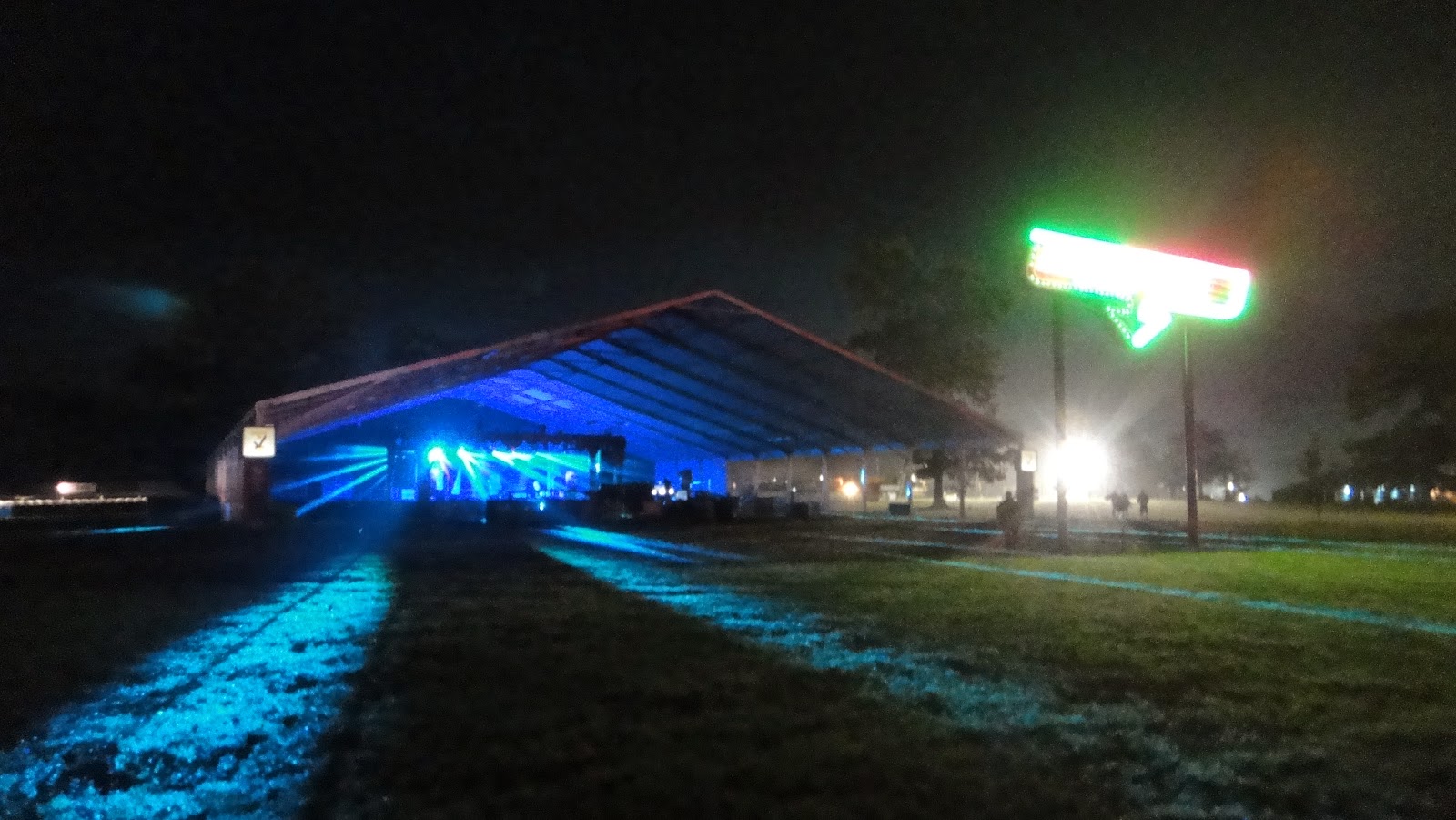 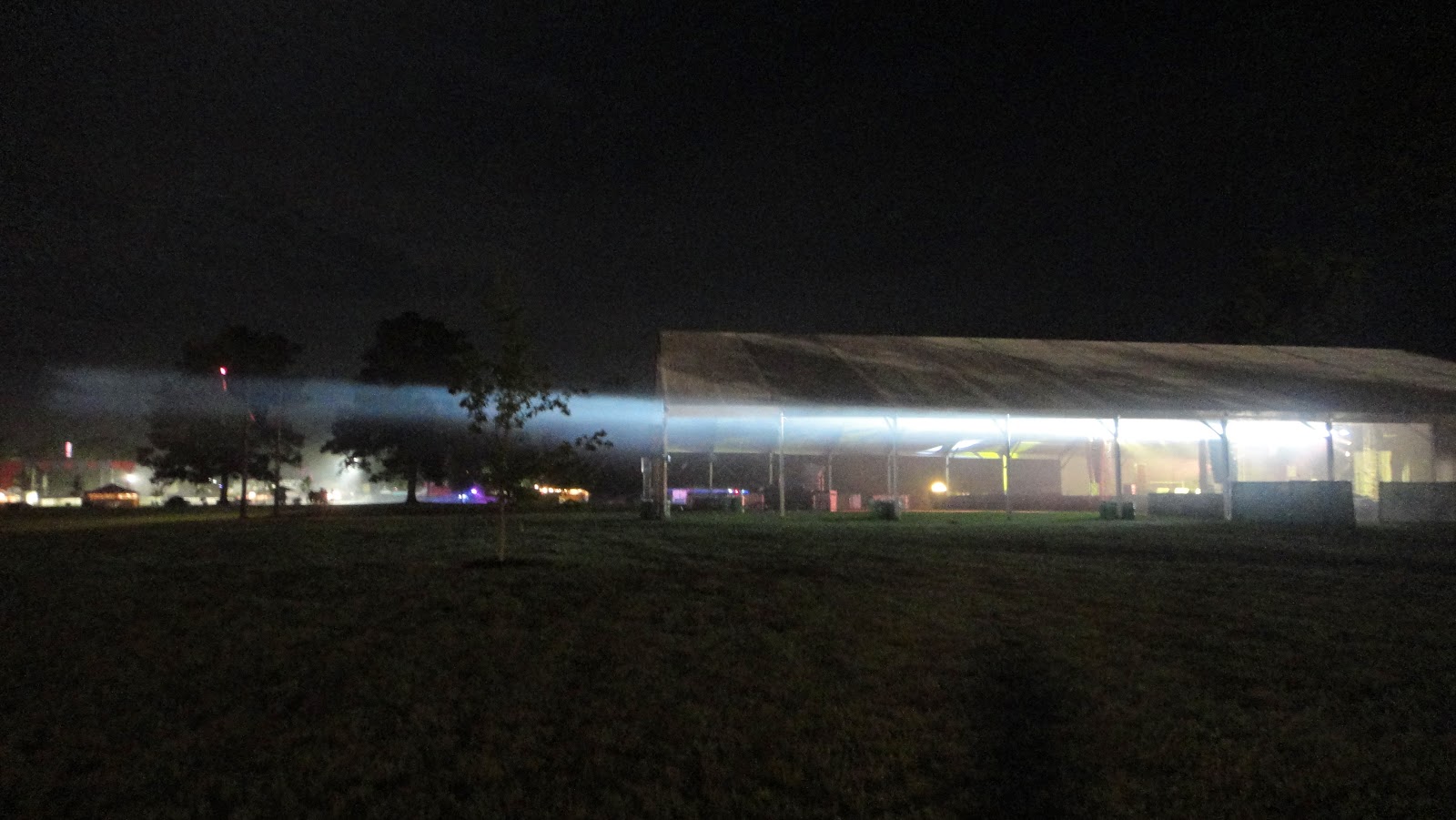