Turned on the a/c on at 8:30 am. Since we decided to use the shower for storage space, I got up and waited 80 minutes for a shower. It was totally worth it.

Let's get this day started! 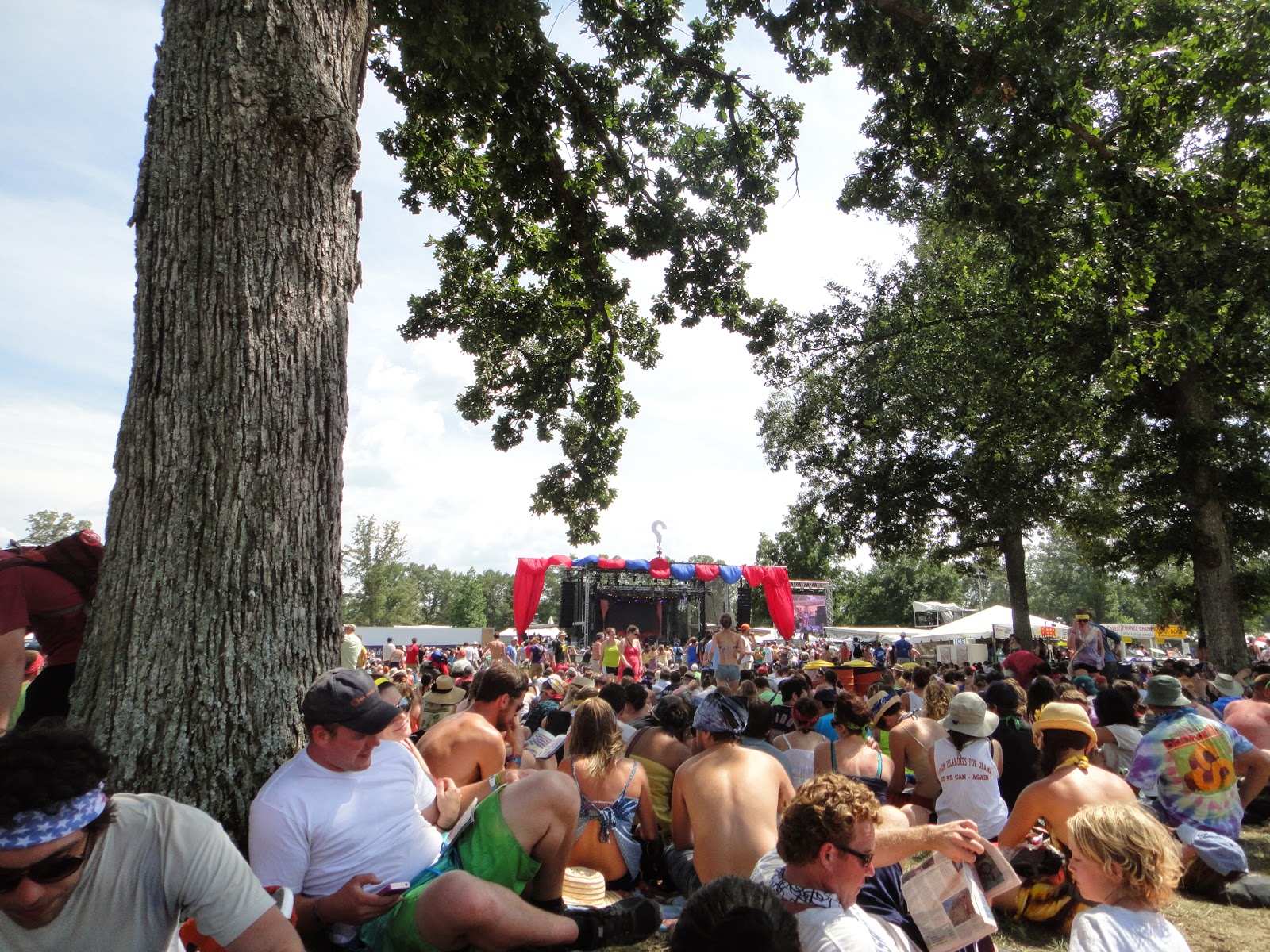 Flogging Molly - 3:15 pm
My goal was to get through the crowd during this set, so as to be near the front for the next set, (Puscifer). Turns out, Flogging Molly has legions of crazy Irish fans. And they love to thrash about wildly anytime the band is playing. By the time I got to the pit, it was 20 degrees warmer, way more humid and two body surfers had already crashed next to me. Meanwhile, the band was frickin great!

Puscifer - 5:00 pm
I had only a 4-ft tall blonde girl standing between me and the barricade by the time the band started. The crowd was now much tamer, as was the music. The band was dressed in flight outfits and sounded great. As typical in a Maynard show, the singers spent half of the time behind large computer screens that displayed their faces via a fisheye camera on the back. They also took turns throwing foil wrapped peanuts marked 'Vagina Airlines' out to the crowd. Maynard finally grabbed a box and told the 'hippies' to pass it along and share the peanuts with the people in back. This box slid across the top of the crowd, the occasional hand dipping in. When it tipped and peanuts fell out, then regained momentum, the fallen peanuts were thrown backward to eager fans. I'd say Maynard's social experiment a success.

The closing song, Undertaker, was unforgettable.

SETLIST: Queen B; Vagina Mine; Dozo; Toma; The Rapture (Fear is a Mind Killa Mix); The Weaver; Potions; Horizons; Balls to the Wall (Accept cover); Conditions of My Parole; Man Overboard; Telling Ghosts; The Undertaker

I left stunned and feeling like I'd been in a cage match. I needed some fluids, nourishment and maybe a hug. Found a Portabella Wrap at the cafe that was so good, I went back the next day. Lots of mixed veggies and a little bit of hummus. It was light but filling and refreshing as hell.

Of note: Bonnaroo did a great job keeping the porta potties clean and I never had to wait to refill my camelback because of the additional water stations. Also, the new trees will offer a lot of shade. [Someday]

Mogwai - 7:00 pm
I've been a fan of Mogwai for awhile. Their instrumental journeys both whisper and shout with delicate exuberance, at least, with a decent internet connection and some rocking speakers. How would they translate live? LOUD. AS. HELL. I sat in front of This Tent, with earplugs (which everyone should use), and the music was terrifically loud. People were coming out of the tent looking to get to lower decimals. I loved every minute of it. They even played my favorite song. :D

SETLIST: White Noise; Rano Pano; I'm Jim Morrison, I'm Dead; Ex-Cowboy; San Pedro; New Paths To Helicon, Pt 1; I Know You Are But What Am I?; How to Be a Werewolf; Hunted by a Freak; Mogwai Fear Satan; Mexican Grand Prix; 2 Rights Make 1 Wrong; Batcat

The Roots
Got to the What Stage just in time to see the end of their set. Just like on TV. But better.

The band was followed by Carrie - the salsa/merengue dancing dog - who danced on stage. Um, yeah.

Dispatch
I had to see some Dispatch. They got the crowd moving. Even me! And I still had 5-hours to go ...


Red Hot Chili Peppers - 10:00 pm
The Chili Peppers put some amazing energy into their live show. Flea is either high or insanely happy or both. A highlight for me was when they played Higher Ground. I love the song; and I got to see Stevie Wonder perform the song on the same stage in 2010. So funky awesome.

SETLIST: Monarchy of Roses; Can't Stop; Dani California; Scar Tissue; Look Around; Throw Away Your Television; Charlie; The Adventures of Rain Dance Maggie; Right on Time; If You Have to Ask; Factory of Faith; Under the Bridge; Higher Ground (Stevie Wonder cover); Californication; By the Way. Encore: Chad & Mauro & Josh Jam; Suck My Kiss; Ethiopia; Give It Away & Final Jam


Superjam - 12:15 am
D'Angelo, huh? That's cool. And it's cool a couple more members of The Roots showed up, (besides ?uestlove). Perhaps my expectations were too high - and I'm not disparaging the artists that played because they were freaking amazing.  But I was thinking that with all of the diversity at the festival, there might be some diversity in the 'Jam too. But these guys are seriously talented and this jam sounded like it was rehearsed, it was so smooth.

SETLIST: Intro > Have You Ever Been (To Electric Ladyland) [Jimi Hendrix] > Superman Lover [Johnny Guitar Watson] > Go Back 2 The Thing > Pride And Vanity [Ohio Players] > Players Balling (Players Doin’ Their Own Thing) [Ohio Players]; Funky Dollar Bill [Funkadelic] > Hit It And Quit It [Funkadelic] > What Is And What Should Never Be [Led Zeppelin]; Babies Making Babies [Sly & The Family Stone] > Hollywood Squares [Bootsy Collins] > ??? > Chicken Grease (teases) > ??? (reprise); Power of Soul [Band of Gypsys]; She Came In Through The Bathroom Window [The Beatles]; My Summertime Thang [The Time] > Jam (including Fire [Ohio Players]) 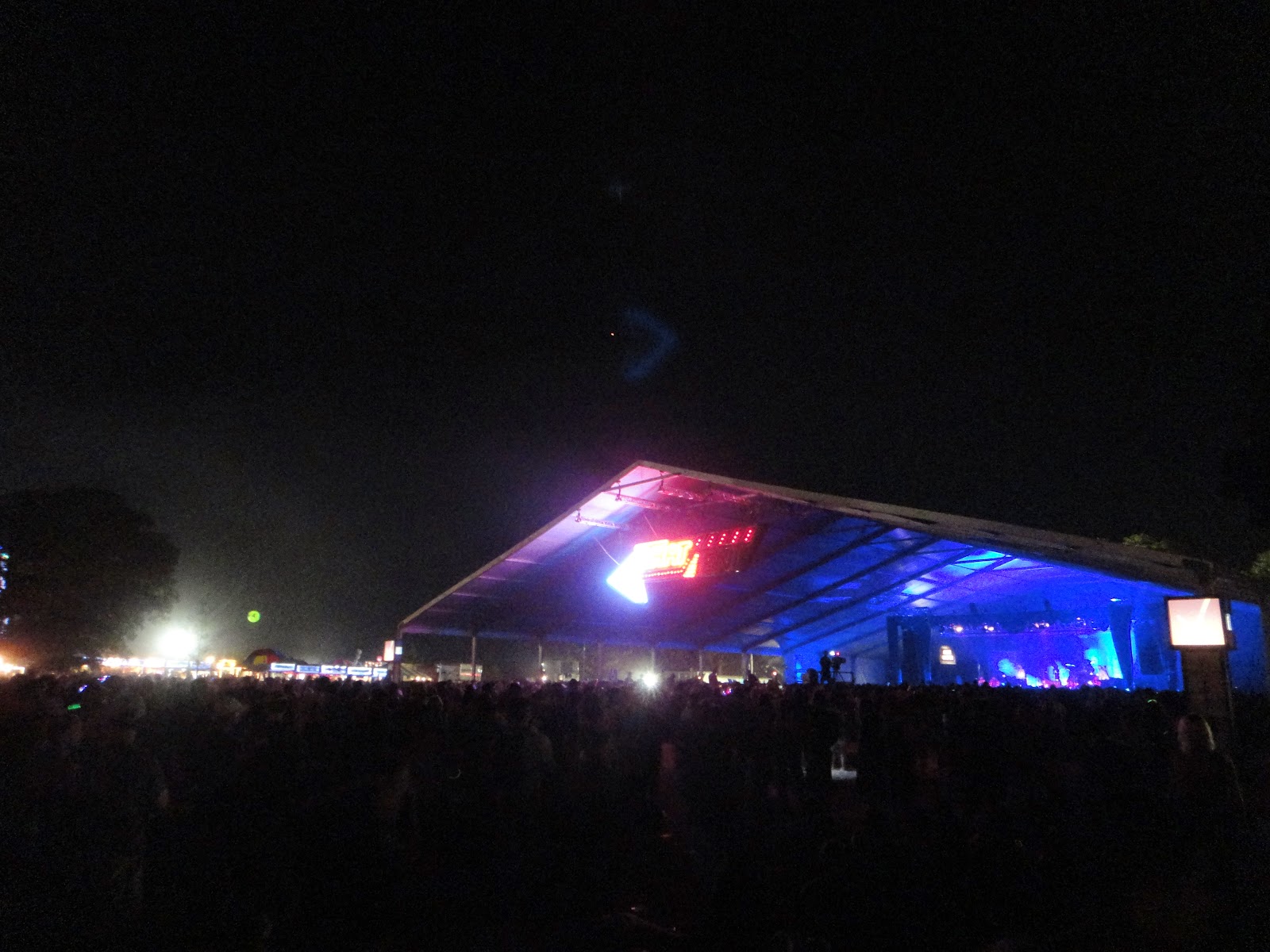 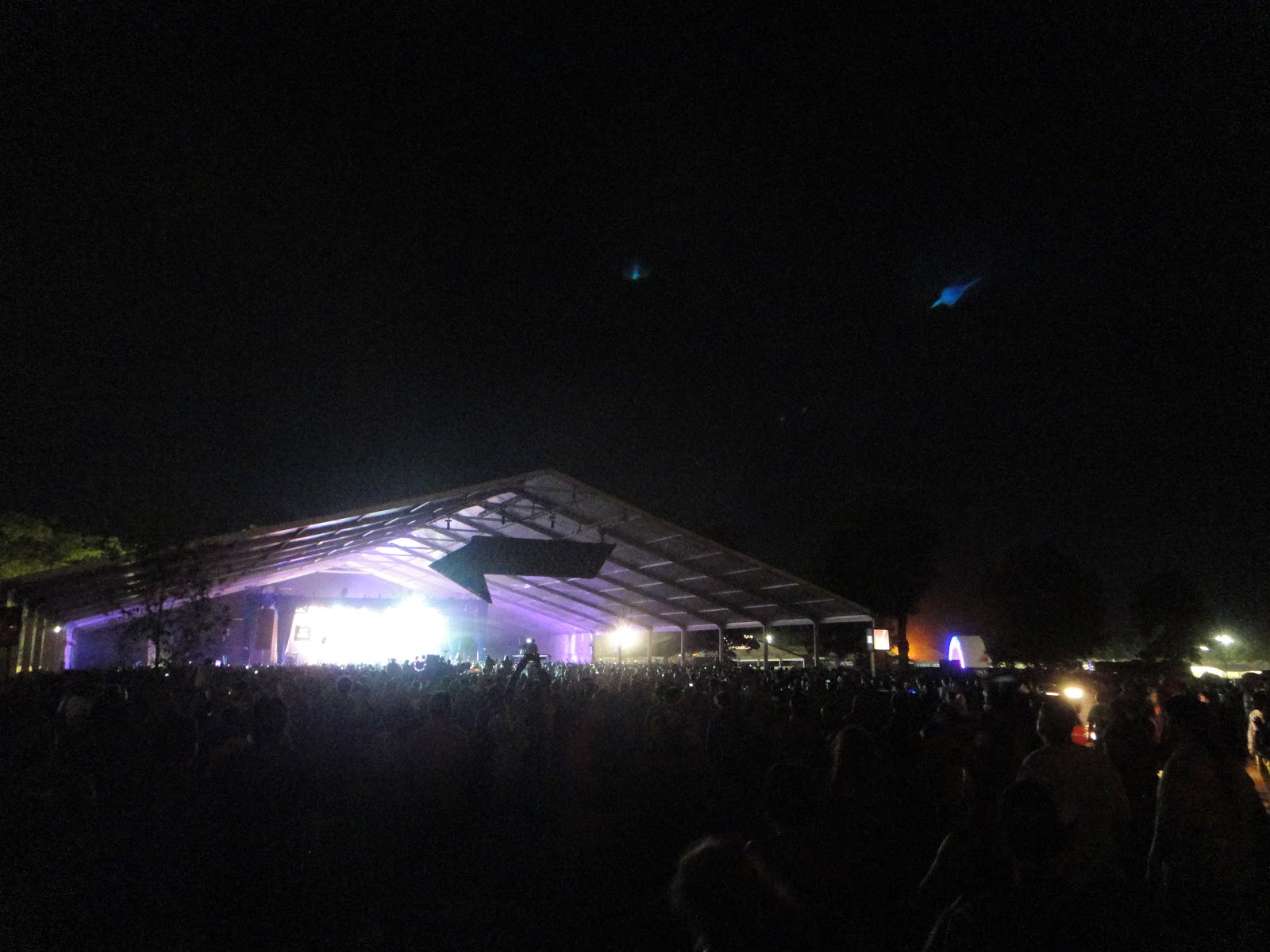 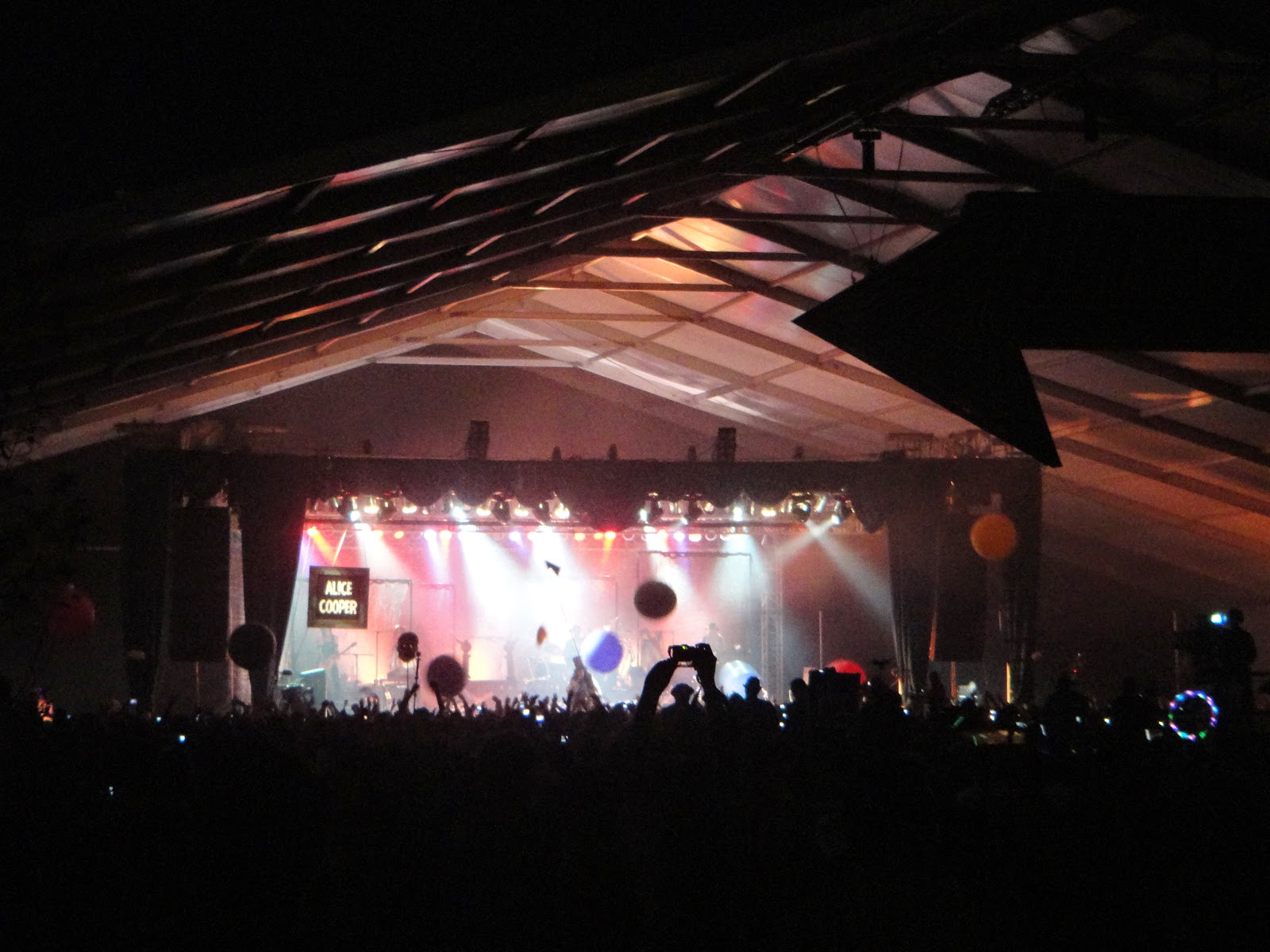 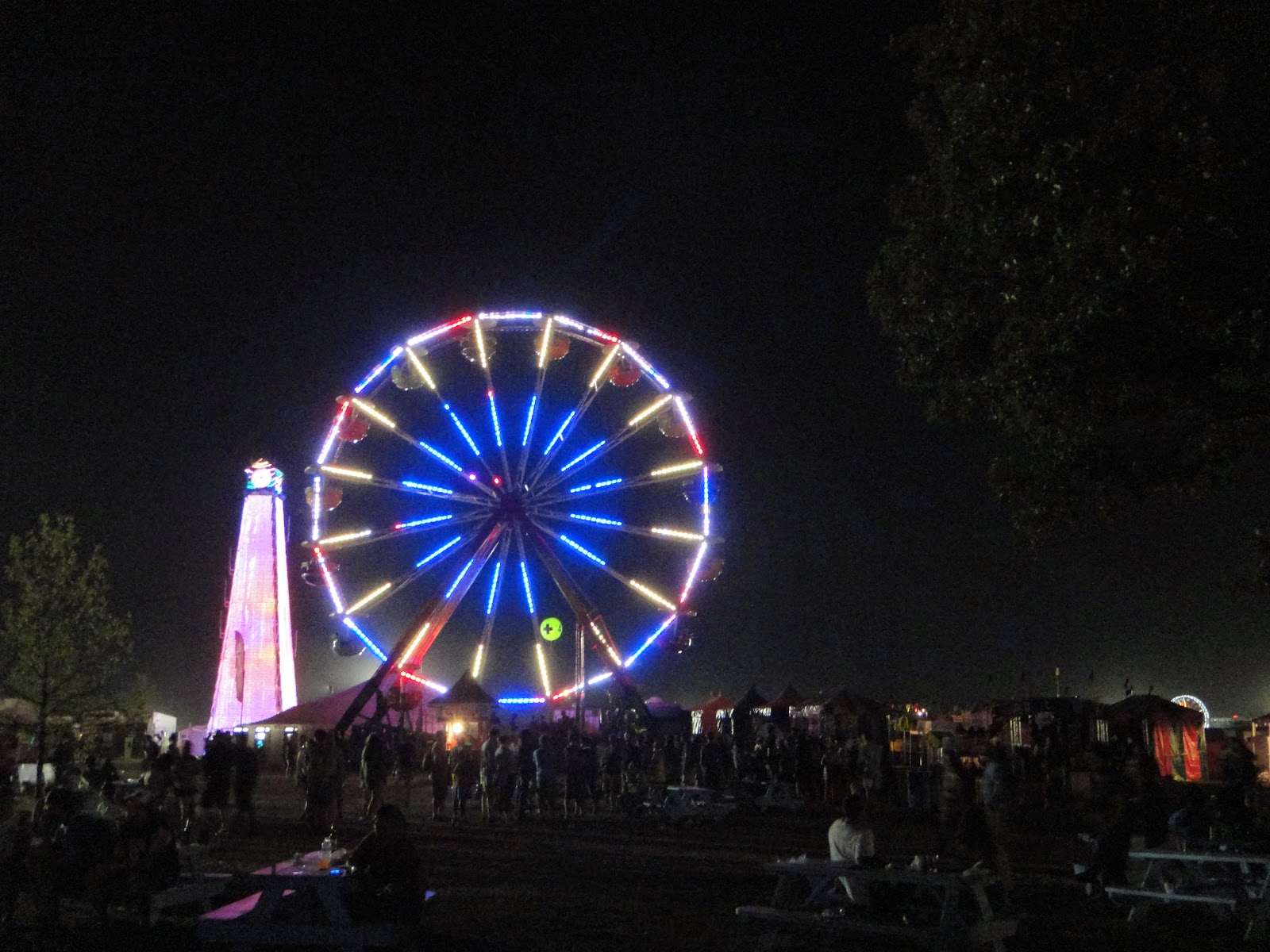 Alice Cooper
Alice was a surprise to me. Apparently, he has spent his career perfecting his stage show and at 64-years old, he's rocking with the best of them. School's Out was rock n roll bliss. Then he busted out Born This Way. I'm very happy I got to see this show.

One of the cool new features this year was the addition of scanners at the corner of the tents and stages and certain locations. If your bracelet was registered it would 'check-in' for you on Facebook, at say, That Tent watching Alice Cooper. It was cool to still connect with the digital world without needing a cell phone.

Afterward, I went to see Pedro Martinez Group. They were feverishly still setting up when I left. I headed back to see the Van Halen tribute band Unchained. They too, were running late. The hell with it. I went back to the RV.

My feet were tired but my KEEN Footwear sandals are doing a terrific job.