Officially more than just a hobby, Bonnaroo Chris returns in 2011.
Man, it's hot. And crowded. And hot. 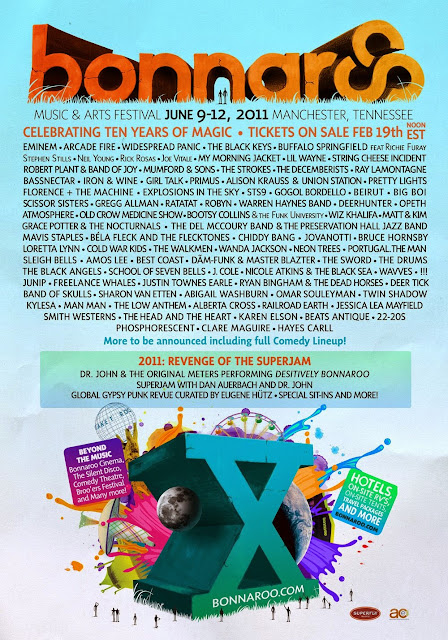 Bonnaroo takes a bit of mental and physical preparation. And I'm not sure I was mentally prepared this year. I didn't sleep the night before. Not even a little. And I got only a few winks the night before that. Lists of items to buy and things that needed to be done ran endlessly through my head. I went to Walmart, (and I fucking hate Walmart), for last minute items as it was the only place open at 1:00 am. I was a flurry of action until we left.

After a 10.5 hour drive and a 5-hour wait in line, we were finally settled on the farm. And after a long, hot day of music and madness, I finally get a decent night's sleep.

And that was only Thursday. But I digress. The trip to Bonnaroo started way before that ...


It starts in February, when the schedule comes out you begin planning your trip. Friends will get excited and consider going with you. Most actually won't. Try not to take it personally. Bonnaroo is a serious commitment.

In mid-May I was contacted on Facebook by two separate people looking for a ride. #1 wanted to camp with us. #2 wanted a one-way ride because he was meeting friends. They were both named Matt. I dispatched a brief survey to Matt 1 which included: List two things you hate. He responded: "Animals dressed in clothes and when someone says 'We need to talk' but refuses to let you know why." We signed him up. Matt 2 offered to chip-in for gas so we signed him up too.

And then ... On Wednesday, June 8, 2011 with both Matts on board the Enterprise cargo van, we hit the grocery store for some last minute items and dry ice. We had already purchased our beer of choice for this year: Magic Hat #9, (in cans of course). We stopped for an early lunch at First Watch. Then it was the long drive through Florida & Georgia ... (We averaged $90 in gas each.)

In line for Bonnaroo, only a few miles from the exit. In fact, we are one of the first 50 or so cars to go through the Exit 112 entrance. Everyone before us has been diverted to another gate. It takes awhile to get through. One of the Matt's has a broken wristband. He has to go get a new one but he catches right back up with us.

We park. The guys directing traffic didn't do a great job. Even a manager walks through and remarks, "Yeah, you guys really fucked this up. Keep going - don't fuck up the next one." The spaces were inconsistent and some people were forced to camp on embankments. Mass chaotic setup ensued as soon as we parked. We manage to squeeze some extra space out of our site: A large sun tent at the back of the van. A 4-man and 2-man tent nearby. Some chairs and a cold beer. Matt 2 departs. I would run into him only once during the festival.

The sky starts to lighten. We crash out for a couple hours. 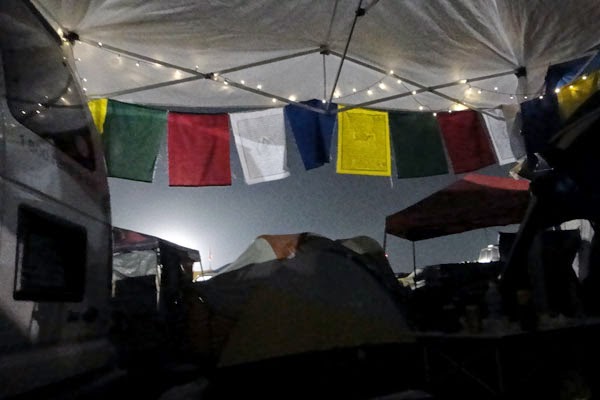