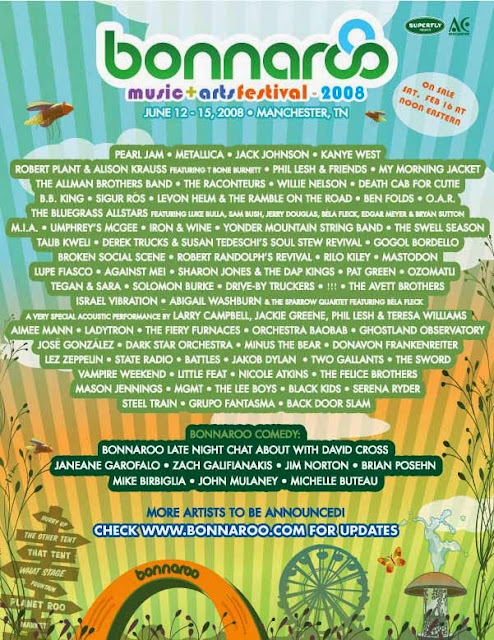 Mike and I left the house at exactly 12:00 am. We had rented an Enterprise cargo van, which proved to be perfect for bringing two men and all the necessary gear to Manchester, TN. In fact, we had room to spare. I was driving the first shift at 2:45 am when we came over a small hill. In the middle lane of I-75, stood a dark SUV – on FIRE. The owner, presumably, was standing next to the vehicle working on it. I slowed down, as did the traffic behind me. Mike dialed 911 and was told units were already en route. A car peeled off to help. We decided to keep going. It was freaky.

After crossing northern Florida and Georgia, having breakfast at Denny’s and gaining an hour in the central time zone – we hit the line of cars. We were 15 miles from the entrance.

There were plenty of things to watch along the way… Like people peeing out in the woods on the side of the road. One girl pee’d in plain sight. And she would turn out to be one of our neighbors at the campsite. There were also motorcycle cops all over the place. About 15 congregated at a motorcycle crash.

Bonnaroo actually has its own interstate exit (Exit 112). Except this one is only open one week a year and it immediately takes you on to a vast field.

They did a quick search of the van. (Cargo vans are notoriously used to bring in boxes of fake Bonnaroo shwag.) They also searched the coolers for glass. It’s a big rule. We purposefully converted everything to Tupperware and other self-sealing items.

Then they strapped on the wristband, which this year was made of sturdy nylon, and sent us back in line where we were directed to our campsite. We ended up in Camp Lando Calrissian, which happens to be the closest non-VIP / non-Handicapped Accessible campground. (There are nearly 100 campgrounds.)

The site was perfect. We were the last row of cars coming in and, as a result, had no one behind us. Our site ended at the road - which was three times the area as last year.
Setup went smoothly. We brought large tarps to manufacture much needed shade. We covered the back of the van, two tents, and a sun tent with tarps, making good use of Mike’s bungee cords. Our coolers from igloocoolers.com kept the food fresh and beers frosty.

After setup, it was time to have a seat, grab a portable fan and a cold beer and relax. Thousands of people trickled in for the next 24 hours. We met our neighbors (west side) Jake, Justin and Travis from Illinois, (about 8 hours away). They were psyched to see Pearl Jam.

Our other neighbors, (east side), were a group of teenagers, some from Ft Lauderdale. They were a rowdy group and often migrated to other sites. They arrived in a black pickup and the poor kid who owned it, would soon lose his keys, spiral slowly into perpetual worry and eventually have to leave early.

About 6pm we ventured into Centeroo - the huge section encompassing all of the concert venues, the comedy club, bars, vendors, the silent disco, art sculptures, and other odd delights – most open 24 hours a day.

We caught two music acts, What Made Milwaukee Famous and solo artist Newton Faulkner. WMMF was energetic and fun. Faulkner had an excellent acoustic presentation and was very inspiring.

Back at the site, dinner consisted of hot dogs and hamburgers cooked my propane flattop grill. We had brownies for dessert. Resting after dinner turned into a full-blown nap. I woke up after midnight to find Mike sound asleep. Yelling and flashing lights wouldn’t wake him, so I left his sorry ass behind.

I was off to see the all-girl Led Zeppelin tribute band: Lez Zeppelin. I arrived about half way through their set and they had just started Cream’s “Sunshine for Your Love.” Damn fine song. After that it was all Zep: “Dyer Maker,” “Since I’ve Been Loving You,” “Moby Dick,” “Blackdog,” “Kashmir” and “Whole Lotta Love.” They did an encore with “Communications Breakdown.” They were frickin awesome.

I went back to the site where I found sleepyhead. We stayed up that night and I found myself, at 4:00 am, listening to Mike play acoustic guitar. He played some Dragonfly Ripple, Seether ... even some Oasis. He is an unofficial Bonnaroo musician. I was there!