Even with tarps – the heat comes on early with a vengeance. There is a nice breeze once outside of the tent. But it’s the direct sun that you constantly fight.

We cooked a breakfast of eggs, sausage, potato’s and fresh fruit. Naturally, we had a brownie for desert. The kid next to us was still looking for his keys. But he was trying to stay positive.

After lunch, we headed into Centeroo. Each time you enter they search the contents of your pockets and/or bags. I passed through without incident and we stopped off to get some frozen mochachinos and some Bonnaroo t-shirts. Then we stopped to see Drive By Truckers perform. It was more folksy than rock but they played so well. Really enjoyed it.

I went to take a picture and noticed … my camera was missing.  %*$#! I backtracked my steps to the t-shirt place. No sign. Maybe I dropped it near the entrance, during security. Nothing. I had spent almost an hour looking.

I found Mike waiting patiently. We wandered a bit and headed back to the site. I lost him somewhere and walked into the Cliff Bars booth and talked with a cute and fit, Shannon, who was here from Denver.

She talked about Cliff Bars 2 Mile Challenge, where they're asking people to bike for two miles that they would normally drive. She also mentioned some interesting things at their other location such as a solar bus, which completely powers the Solar Café next door next to it. I told her I would check it out.

Back to the site and Mike was there. I sat down in my folding chair and popped back up. Something on the chair had jammed me in the butt. Only it wasn’t on the chair. It was my camera – in my back pocket the whole time. Agghhh!

We went in after 4pm to catch Les Claypool, (of the band Primus). He has played every single Bonnaroo to date. He was wearing a pig mask. His music is a little weird. I just don’t get it. Bygones.

After that we headed over to the What Stage, (the largest venue, followed by the Which Stage and the three Tents.), where we caught The Raconteurs. It was an exceptional show. They were ferocious and intense. Jack White even fell onto to an amp while playing guitar. Excellent band.

We walked over to catch Willie Nelson’s set. I got what I expected from Willie. He played “Mama, Don’t Let Your Babies Grow up to be Cowboys” and “On the Road Again.” I did not recognize the others. He was so fun to see.

But Chris Rock started before Willie ended and so we left to see the comedian. Apparently, most of Bonnaroo had the same idea.

It was here that I met Matthew and Melissa from Demopolis, Alabama. Cute kids.

Chris Rock came out kind of late but he quickly had the crowd on his side. He was introduced by Lars and Kirk from Metallica.

He talked about politics and the presidential candidates like Barack Obama. He was impressed by Obama's unmistakable blackness, and said his name makes him sound like "the bass player for the Commodores." He talked about rising gas prices despite the war in Iraq, which some predicted would help keep oil under control. "Let me tell you something," he said. "If I invade IHOP, pancakes are going to be cheaper in my house." He talked about the differences in men and women – “Women can’t go backwards financially; men can’t go backwards sexually.”

He had a huge crowd, at Bonnaroo, and it was hanging on his every word. It had begun to rain during his set. Not very hard, just a light sprinkle to cool everybody off. He ended at 8:45pm and we decided to stick around for Metallica.

The crowd swelled. Mike and I had decided to get close to the stage for this show and people crammed themselves in. It was slightly claustrophobic. Chris Rock introduced Metallica at 9:15pm. The crowd erupted.

They blasted into “Creeping Death.” They played a slew of songs – Master of Puppets, Fade to Black, One, Sad But True, Harvester of Sorrow, Ride the Lightning and Enter Sandman to name a few. They had fireworks and explosions. The rain grew steadier.
Metallica closed their set with a blistering version of Seek and Destroy. I have mixed feelings with this band but tonight they put on one hell of a show. What a day. 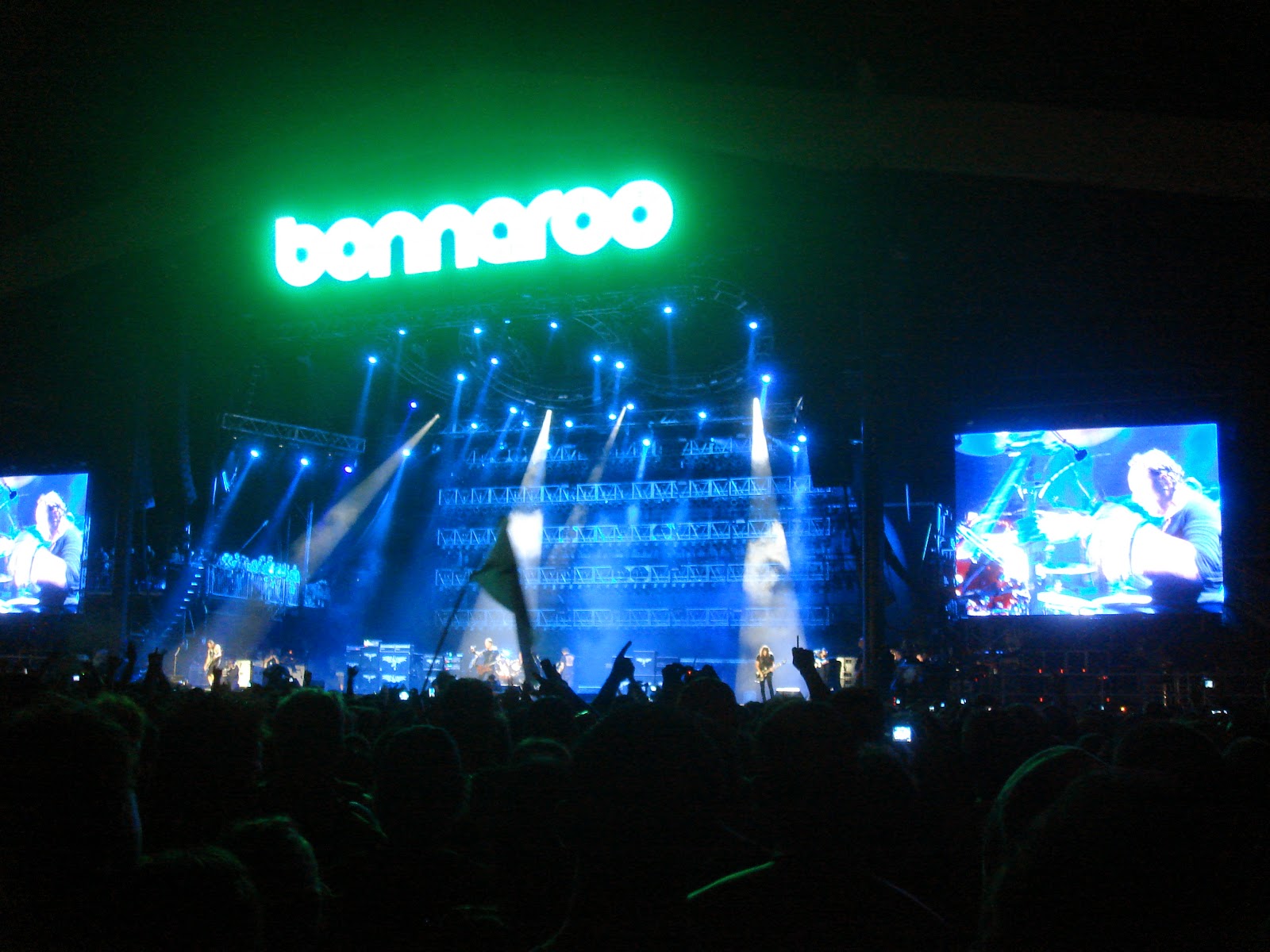 Mike and I made it back to campsite about 15 minutes before the rain really started to come down. It came in several minute bouts every 20 minutes or so. The wind would whip the tarps into a frenzy and I had a little leak in the back. Some MacGyver-style engineering saved us. The group of kids next to us, (east side), left their tent windows wide open as the rain poured in.

Needless to say we did not venture back out to catch late-night shows DJ Tiesto or the elusive SuperJam, which we also missed last year. Ah, well.