I wake up at 8:30 in the morning, whether I want to or not. That’s because the sun kicks the heat on about 8am and it takes about 30 minutes to realize that I'm cooking in my very own Eazy Bake Oven. And when I get up and look out of the tent – everything is covered with a sweet layer of dirt.


Naturally, nature’s duty is the first call to action. I stumbled the short four-minute walk to the nearest line of porta-potties – and got in line. Not really what one hopes for first thing in the morning, but everyone is in the same boat. Girls - still in their pajamas and ponytails with that cute sleepy-look still fresh on their face. Guys, shifting from foot to foot, hoping to dispose of long overdue beer. The line moved briskly, and the porta-potties were, for the most part, pretty clean. I ran into only a couple of them that were unusable over the weekend. But I have to say that Bonnaroo did a fantastic job of keeping up with them. (Thank you!)

Back at the site, Mike and I made what would be our breakfast everyday: Eggs, bacon, hash browns and fresh strawberries, blueberries, raspberries and blackberries. And a brownie for dessert.

A short while later, Mike’s friend Andrew stopped by for a visit and filled us in on the goings-on in his part of the site. Andrew was one of the first ones to arrive at Bonnaroo when they opened gates at midnight on Wednesday. And all of those first soles were pushed far into the reaches of the campgrounds – literally to the back. A sort of “land of the lost” where anything goes and usually does. Hard to believe it was more decadent than our current surroundings but I did not investigate it myself so I will take his word for it.

Cold War Kids was scheduled to play at 1:15pm, so I made my way leisurely into Centeroo after lunch. We were about a ten-minute walk from the concert field. I passed two guys in a shaded area holding a sign reading “Free High Fives.” Sorry to say, I didn’t take them up on it. I found That Tent where CWK were playing and it was overfilled with music fans, all eager to get out of the sun. I did not recognize the current song so I headed off to the official merchandise tent for shade and souvenirs. It wasn’t very crowded and I found an overwhelming selection of tee shirts, stickers, posters, blankets, buttons, bags, hats, etc. Just about every band had items stuck on a 40-foot wall. I made some smart purchases and headed to the music.

I had feared that several concerts in one large area would cause a distracting overlap in music, which was really not the case. The music from one stage drifted away just in time for new music to drift in. I got back to Cold War Kids to hear the last few songs of their set – all of which I knew. They sounded great.

Back at the site, Mike and I decided to head-in to see Kings of Leon. They started at 3:45pm and we got to the What Stage to find them already underway. It was then that I noticed my wallet was missing. Back to the site I went - where I found it… (just where I suspected I had left it). So I walked BACK to Centeroo to finish watching the Kings who are Bonnaroo veterans and produce some fantastic southern rock and roll. They overlapped The Nightwatchman, which is Tom Morello’s solo project. Tom is, of course, the guitarist for Rage Against the Machine and is personally responsible for making guitars produce noises that no one else can. He played a song (for the second time – for a music video - as he had warned the crowd) and got a super enthusiastic response. “Here is your reward…” he said after and with his acoustic guitar he proceeded to play "Guerrilla Radio" in a slow tempo. Then he went on to play Woodie Guthries’ "This Land is Your Land" adding lyrics he said were originally removed to “...keep people like you from going to see people like me.” Pretty cool.

We headed back to campsite as the heat was heavy around us. Over the course of the weekend we would pass by many people that were just passed out. Not in their tent or chair - but along pathways and in concert fields. They simply dropped when the energy ran out. We saw women with nothing but colorful paint disguising their boobs. Then there were the color people... Half-naked and covered completely in green or red … color. It wasn’t paint really – it looked like water-color. We also watched a shell game along one of the campsite roads, (the roads are all named, like 6th Ave, and every intersection has street signs so you can find your way). The shell game was run by a foreign fellow with very nimble fingers. He flipped the little red ball back-and-forth under shells and suddenly stopped and asked who wanted to bet where it was. A guy threw $200 on the table and pointed to the far shell. The man took the money and showed him an empty shell. The next contestant watched purposefully and pointed to the left shell saying “I got $200 on that one.” He won to the dismay of the operator. We had a couple hours before the next show we wanted to attend and so dinner was a fancy New York Strip steak and garlic mashed potatoes. And a brownie, of course.

The sun was setting and the air was cooling down a notch when we headed back in to watch the enigmatic band, Tool. The gates at Centeroo found people being turned away for having cameras – something that was not a problem previously. Apparently, Tool was camera shy and had declined them into the concert area. I still brought mine in – security consisted of overgrown teenagers who all looked tired. And for that matter, there were thousands of camera flashes during the show. All Tool did was slow the line down. Thanks guys. (the pictures did not come out that great anyway) That aside, the band put on an incredible show, trying once again to prove itself to be the loudest band in the universe. They had a crazy laser show, which provided superb entertainment to many of the onlookers who were medicated in one form or another. They played a strong setlist that included “Stinkfist,” “46&2,” “I know the pieces fit,” “Vicarious” and ending with “Aenima.” The highlight of the show for me was during the song “Lateralus,” where singer Maynard stopped to introduce, “Tom Fucking Morello.” Morello came out with a white and chrome, doubled necked, electric guitar and proceeded to whip some ass in an intense instrumental.

Tool is a fantastic mystery as far as bands go. The singer is not really a frontman – in fact he sings near the back of the stage, and the adjacent jumbotrons never show the band members – instead they play the crazy music video-esqe images that Tool is known for. Still, they are an incredible act to witness. 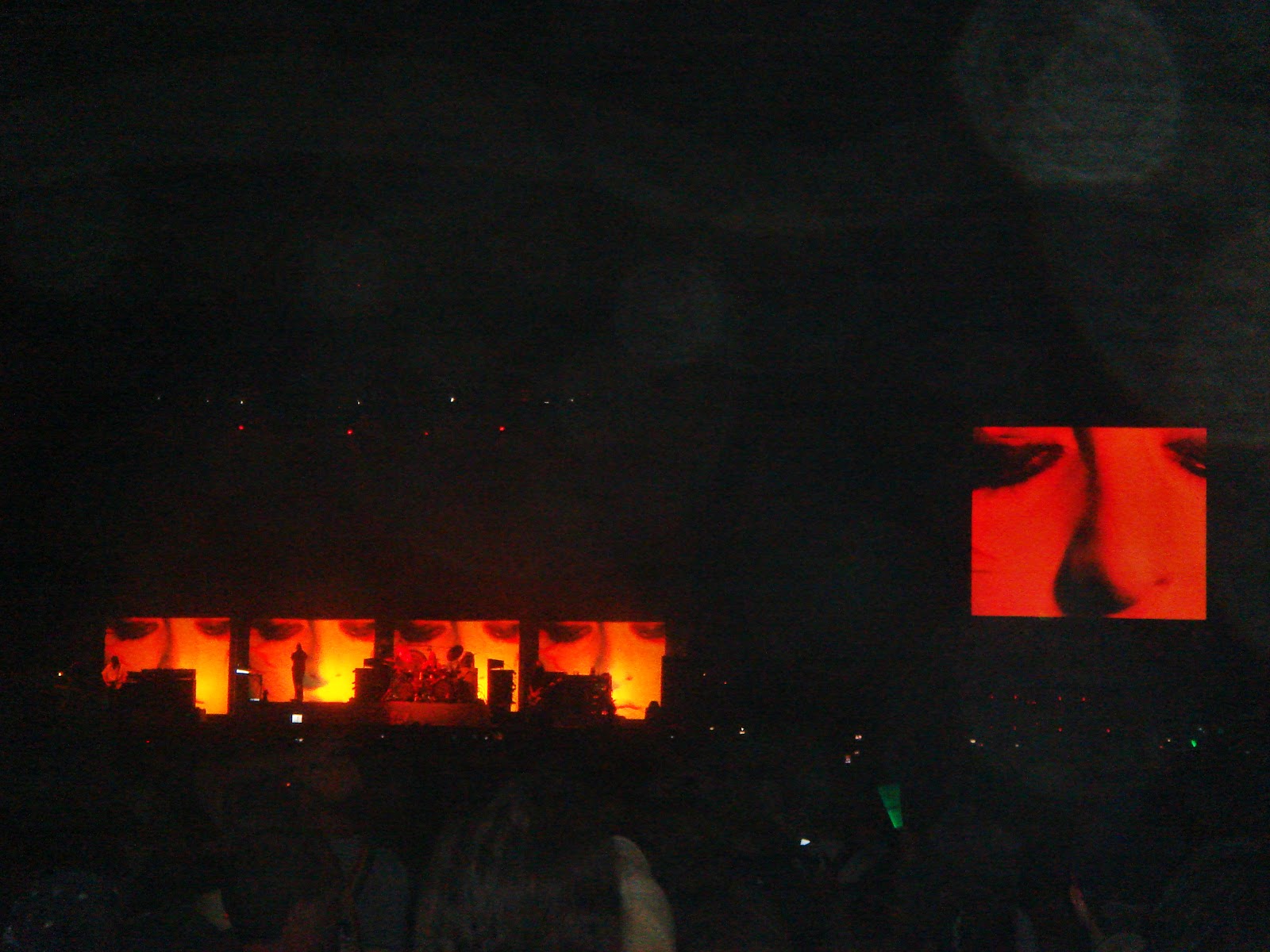 Had to go back to the campsite after Tool ended early at 11pm. There were still 4 hours of music to go, including the infamous Superjam, but the combination of blistering hot sun and traveling back and forth 80 times that day had left me drained of energy. And while my KEEN Footwear sandals held up well, I did experience an uncomfortable chafing that I don’t want to talk about.